10 Irish Baby Boy Names And What They Really Mean

Not so long ago, we rounded up 10 Irish girls names and their alleged meanings. Now, we turn our attention to the boys.

From Connor to Finn, we're sure you'll find a name and a definition that you would like for your bundle of joy.

In all honesty, we can't decide on just one!

A popular name among parents today, this moniker means strong willed. In other words, you’ll have a determined tot on your hands.

This one can also be spelled Aedan or Aodhan and is defined as “born of fire.” We’d say there’ll never be a dull day with this one around.

You could have a saver or a brave little man with this name as it apparently means “wealthy protector.” 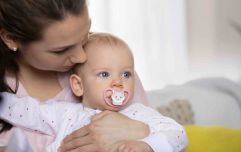 END_OF_DOCUMENT_TOKEN_TO_BE_REPLACED

We adore this name which is said to mean “fair.” (Unfortunately we can’t tell you if that refers to appearance or demeanour.)

Another popular choice, Cillian is believed to mean strife or fierce and excuse us for the terrible pun but we think it's a fierce name.

Stemming from “William”, this one is said to mean “Guardian” or “Warrior.” We love it... mainly because we love Liam Neeson.

When he grows up and starts making friends, you might not see him very much considering that his name allegedly means "without enemies".

This moniker is derived from the Latin Patricius which means “nobly born”. You're guaranteed that he'll turn out to be a gentleman!

This dear name means "little deer" and remains to be a popular choice among parents in Ireland. We also like the idea of shortening it to "Óis".

You could have a "little fierce one" on your hands if you opt for this traditional moniker but hey, there's nothing wrong with having a little bit of fight!


popular
David Beckham shared his dinner on social media and we really wish he hadn't
Mini Bella Boutique is running a huge online clearance sale as it sadly closes
Attention parents and kids! Here are 3 simple but scrumptious recipes to keep you busy all afternoon
Kim Kardashian says lockdown has made her realise she doesn't want more kids
How to potty train your toddler in three days, according to the experts
Dad hides coronavirus symptoms from hospital staff in order to see newborn
Do babies in Ireland still get the BCG vaccine to protect against tuberculosis?

You may also like
4 days ago
Due in 2020? These baby girl names are sure to be popular in the coming months
5 days ago
Because things will get better: 10 beautiful baby names that all symbolise 'hope'
1 week ago
18 classic baby names with a twist that you'll want to steal
1 week ago
A true classic: 13 olden day names we think are totally perfect for modern-day babies
1 week ago
16 very regal baby boy names that'll never go out of fashion
2 weeks ago
11 baby names that are perfect for parents who like to stand out
Next Page