There are many reasons to go for a name that is steeped in tradition and history when it comes to selecting a moniker for your newborn baby.

However, many parents would prefer more rare baby names, ensuring that their offspring won't have to share a name with half their class by the time they are old enough to start school.

And so, here goes. If traditional names aren't quite your thing, we have rounded up 10 really lovely, rare baby names for you to fall in love with:

It would have originally been used a a girl's name, but we think this moniker would work equally well as a name for a little boy.

It is thought to come from the Greek word 'Meli' which means 'honey', making it one sweet option when naming a brand new baby girl.

This gorgeous moniker dates back to the ancient Roman family name Fabius, and we think it sounds all sorts of perfect for a modern day tot too. 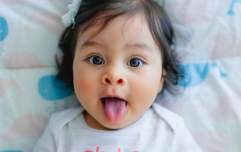 END_OF_DOCUMENT_TOKEN_TO_BE_REPLACED

This gorgeous-sounding name is being used for both boys and girls, and we think you'd better get in there quickly before it gets too popular.

If you love the name Noah, but want to avoid it as it has been topping all the name-charts the last few years, Noe (pronounced "NO-e,") might just be an option for you.

Longer names are slowly coming back into fashion. Alternatively, you could go for the more French-sounding Vivienne.

Popular in countries like Finland, Germany, Slovenia, and Georgia, this boys' name is yet to reach popularity on our shores.

Nicole Richie opted for this beautiful moniker for her first-born, and the name is though to have come from the Old English root words which roughly translate to either "rock hill" or "army hill".

You might think of John Lennon when you hear this name, but Lennon was originally an Anglicised version of the Irish surname Ó Leannáin, which translates to "descendant of Leannán".

This beautiful name comes from astronomy and is the name of a constellation of stars. Lyra is named after the lyre of the mythological figure Orpheus, who created music so beautiful that he was able to convince the god of the underworld to allow him to bring his deceased wife back to the land of the living.


popular
10 seriously unique Irish baby names that are not too popular (yet)
Mother's Day gift guide: 13 presents we'll be gifting all the mamas on our list
Mindfulness: 7 simple techniques to try when your mind just won't stop worrying
RTÉ 2 wins rights to Harry and Meghan's Oprah interview
Baz Ashmawy announces birth of first grandchild
A TikTok hack shows how partners can help a pregnant mum when her back is hurting
Leaving Cert students to get six days from next Wednesday to select between exams or accredited grades
You may also like
2 days ago
10 seriously unique Irish baby names that are not too popular (yet)
5 days ago
Here are the 90s baby names we reckon will definitely swing back into fashion again
1 week ago
A true classic! 10 timeless baby names that will never go out of style
1 week ago
The most popular baby names in Ireland in 2020 have been revealed
1 week ago
Due in March? 10 perfect names for your little Pisces baby
1 week ago
40 gorgeous baby names predicted to be trending in the next decade
Next Page