10 vintage baby names for your little bundle of joy

Naming the baby can be as fraught as it is fun.

The Man and I couldn't agree on anything, natch. I was also receiving the most outlandish suggestions from my mother who I thought would have reasonably conservative taste, not so. Aeneas anyone? Didn't think so, it kind of rhymes with penis doesn't it?

And any time I mused on a name to any of my friends they would immediately ruin the name by saying something like, "I knew a Daisy once, she was the biggest slut." Great there goes Daisy out of the running.

In the end I went with a name that was unusual-ish without being too celeb-baby wacky and that according to my research was last popular in the 1800s. This I believe is a good route to finding a cute name that won't lead to your child being referred to a "Jack 4" or "Emily 19" in school.

Meaning: It's the name of a river in Glasgow, Scotland

Famous namesake: Well as one half of the crime duo Bonnie & Clyde you may be setting the child up for infamy...let's hope not.

Famous namesake: The bab will be in esteemed company in the shape of Elmo of Sesame Street and Saint Elmo patron saint of sailors.

Meaning: "Near the stony clearing" 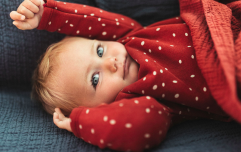 END_OF_DOCUMENT_TOKEN_TO_BE_REPLACED

Famous namesake: Apart from "My darling Clementine" there's not too many famous ones kicking around.

Meaning: "From the forest"

Famous namesake: The doomed Plath does spring to mind, but there're many happy connotations for this feminine name also.


popular
#MomLife: 7 things I wish I done more of when my children were babies
Get ready to live like the stars because Lidl is selling an entire home cinema range
Covid-19: People should limit themselves to one sexual partner, says Dr Holohan
Kids still got a pesky case of lice with school out? Here's how to fix it
Staycation: 10 bargain buys to turn your back garden into a chic hotel patio
Energia and GIY are giving away free grow boxes so you can start a vegetable patch with your kids
Ireland's only milk bank: how and why you should donate breastmilk
You may also like
1 week ago
10 longer baby names which all have adorable nicknames too
2 weeks ago
Greece is the word: 13 beautiful Greek baby names we want to steal
2 weeks ago
11 under-the-radar (but tres adorable) French baby names you need to know about
2 weeks ago
10 one-syllable baby names that are perfectly short and sweet
2 weeks ago
J'adore! 15 tres beautiful French baby girl names you'll fall in love with
3 weeks ago
Gorgeous summer-inspired baby names: 10 ideas for girls and 10 for boys
Next Page