The home of pizza. Gelato. Espresso. And dolce vita by the bucketload.

And while there is no denying that the Italians know their way around food (oh God, the FOOD), it turns out they are also pretty darn great when it comes to naming their babies too.

And if you don't believe us – just take a look at these seriously steal-worthy baby girl names we rooted out:

This name is popular across many European countries, but has its roots in Italy. Adelina is a Latin variation of Adela, a name that dates back to the ancient Germanic element "adal," which means "noble."

There was Serena van der Woodsen, of course, but the name Serena is actually Italian in origian, and is derived from the word serene (calm, peaceful, tranquil).

END_OF_DOCUMENT_TOKEN_TO_BE_REPLACED

The Italian version of the Greek moniker Helenē, (of Troy – remember?), which is said to mean 'light', 'torch' or 'bright'.

This name has existed in various forms for centuries, and although popular in Italy today, it actually dates back to ancient Greece. Alessia, and other related names, are derived from the Greek word "alexo" which means "to defend, to help."

If you like flower names, we think you cannot beat Viola, a name that first caught on in the Middle Ages, and has remained popular in many countries, including Italy. 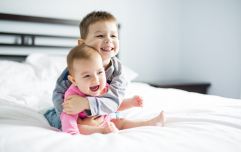 END_OF_DOCUMENT_TOKEN_TO_BE_REPLACED

The feminine form of Valentine and really just a lovely sounding name, we think.

Like many other popular Italian names, Luciana is also used in Spanish-speaking countries as well as Portugal, although its roots are very much It is said to come from the word "lux," which means "light."

Another version of a name that many claim comes from the Greek Helenē, and also now made popular by Disney, and their Elena of Avalor.

Trust the Italians to come up with such a pretty version of the name Margaret. Also, ever hear of fashion heiress (and IT girl) Margherita Missoni?

popular
CMO confirms death of child in Ireland from invasive Strep A
Father took daughter to hospital three times before she died of Strep A
Rod Stewart's 11 year old son rushed to hospital after collapsing at football match
The government has launched a new funding model for Irish childcare services
20 Unisex Irish Baby Names That Are Absolutely Magical
Some parents were disturbed to discover that LOL Surprise Dolls have genitals
Expert says Cocomelon acts "as a drug" to kids' brains
You may also like
2 weeks ago
15 utterly perfect names for babies born in winter
2 weeks ago
I'm embarrassed about the name I gave my baby girl
2 weeks ago
Corrie star Julia Goulding welcomes a baby girl
3 weeks ago
Mum-to-be Molly Mae reveals the baby boy name she loved
3 weeks ago
These are the top baby names inspired by footballers
3 weeks ago
Expecting in December? These are the top Christmas-inspired baby names
Next Page