If you want your kid to stand out when he or she starts school, make sure you pick a name that they won't have to share with everyone else in the class.

Right now, we are literally obsessed with these cooler-than-cool names:

The little boy in Liane Moriarty’s Big Little Lies was named Ziggy, and we think it is all sorts of cool.

This unisex name can work for both, but we think it makes a striking moniker for a little girl.

The coolest kid in his class, no doubt. 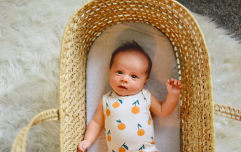 Goodbye Craig, Ross and Shannon: These are the baby names nobody wants to use anymore

END_OF_DOCUMENT_TOKEN_TO_BE_REPLACED

She sounds like the kind of girl every other kid will want to be friends with.

The main God of Norse mythology, we think it makes a striking name for your little dude.

Another unisex nature name we think will make a really cool moniker for your little girl.

I might be biased because I have a Luca myself (Luca Phoenix), but I love this short and sweet Italian name so much.

The Z make it cool, you see.

You don't have to be a Jimi Hendrix names to love this insanely cool moniker.

She won't have to share her trendy moniker with any other kids in her class, for sure.


popular
Children under two who are given antibiotics more likely to develop asthma and other illnesses
Children who sleep in your bed grow into 'clever and confident adults' according to several studies
It's almost time! 5 oh-so festive buys we are picking up from Penneys the minute they open
#ToBeHonest I never watched the Late Late Toy Show as a child and now I finally understand why
#mumlife: Here is how to savour your children more – while they are still little
Mum shares the bargain IKEA bed hack that allowed her thee boys to share a room
Goodbye Craig, Ross and Shannon: These are the baby names nobody wants to use anymore
You may also like
1 day ago
Bound for greatness: 20 baby names to set your little one up for success
6 days ago
10 baby names that are popular in Germany right now we want to steal
1 week ago
11 under-the-radar (but tres adorable) French baby names you need to know about
1 week ago
24 wonderful baby names (with some just as lovely nicknames)
1 week ago
18 very traditional baby names that will forever sound classic and lovely
1 week ago
Apparently, these are the worst baby names 'of all time' according to people
Next Page