Not great news for the couple.

A lot of celebrities over the years have named their children very unusual names with everything from Apple to Stormi.

That being said I don't think any baby name has caused as much of a stir online as the name Elon Musk and Grimes chose for their newborn baby.

We need the name we literally need it https://t.co/ZnhOxf3vfn

Yes, the name that the tech giant and musician decided upon for their son is X Æ A-12.

Since the tech giant revealed the name on Twitter there has been no end of speculation on how the name is actually pronounced.

After some research some suggested it actually wasn't that unusual at all and was actually Kyle (but spelt in a kind of code).

So it's Kyle Musk? pic.twitter.com/9iI9f63Wwb 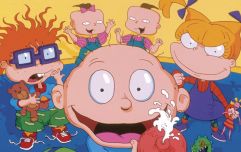 END_OF_DOCUMENT_TOKEN_TO_BE_REPLACED

It seems that all this speculation was for nothing though as the couple have recently discovered that they can't actually name their baby X Æ A-12.

The reason for this being that it is it is against California law for symbols and numbers to be used in a name.

"In California, you can only use the '26 characters' of the English language in your baby name. Thus, you can't have numbers, Roman numerals, accents, umlauts or other symbols or emojis. Although an apostrophe, for a name like 'O'Connor,' is acceptable."

This would mean that only the X A part of the child's name would be allowed on his birth certificate, making the name stranger if anything.

It's not currently known what the couple intend on doing, if they actually intended on naming their child X Æ A-12 at all.

Sometimes celebrities like to throw fans off by giving out a fake name which could be the case for the Musk Grimes baby.


popular
10 beautiful baby girl names from the 1900s that are making a comeback
Greece is the word: 13 beautiful Greek baby names we want to steal
Summer hair: How to perfect these stunning beach waves in less than five minutes
J'adore! 15 tres beautiful French baby girl names you'll fall in love with
Whoops! A study has found pregnancy is contagious among friends (so watch out!)
Time for their first toothbrush! 5 signs your little one is teething
10 one-syllable baby names that are perfectly short and sweet
You may also like
5 days ago
Irish nametag company reveals their most requested boys and girls names
6 days ago
19 absolutely heavenly baby names inspired by gods and goddesses
1 week ago
Children with these names are statistically more likely to be successful
1 month ago
April in ten languages that would make the perfect name for any April born baby
3 months ago
15 fierce and fabulous Viking inspired baby names perfect for any little warrior
3 months ago
16 elegant and unusual Norman inspired names that will take you back in time
Next Page