Gigi Hadid reveals name of her and Zayn Malik's daughter

Last year supermodel Gigi Hadid and pop star Zayn Malik revealed they were due to give birth just weeks before the arrival of their daughter, wanting to keep it private for as long as possible.

Despite announcing that they were now proud parents back in September the happy couple never revealed their daughter's name and considering how secretive they were about the pregnancy we assumed they were keep it under wraps and not telling the public.

We thought we'd never know the name of baby Hadid Malik, and hey if they want to keep their child's name private that's totally within their right.

However Gigi recently updated her Instagram bio and right under her name it now says "khai’s mom". 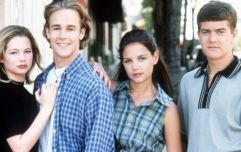 END_OF_DOCUMENT_TOKEN_TO_BE_REPLACED

So it looks like Gigi and Zayn are now parents to adorable baby Khai and we're not going to lie, we love the name.

It's so unusual but in a good way, not in a Moon Unit Zappa way.

The 25-year-old Hadid revealed to fans on Twitter that she found out she was pregnant the day before the Tom Ford show during Paris Fashion Week.

"I was so nauseous backstage but I learned I could kinda control it if I continuously ate, so my mom would pack me snacks before each show, bless."

Given the strict diet Gigi has said she's had to stick to in the past I'm guessing her mum probably knew before she was pregnant before she did with her sudden change in eating and nausea.

Gigi and Zayn first started dating in 2015. Previous to that Hadid had dated Cody Simpson and Joe Jonas while Malik dated fellow pop star Perrie Edwards of the band Little Mix before his relationship with Hadid.

In the past Hadid and Malik have appeared together on the August 2017 cover of Vogue and for a Versace ad campaign.


popular
These 5 Foods Could Increase Your Chances of Having Twins
7 Things To Buy The Newborn That Has Everything
Rare "Sahara dust" weather event expected to hit Ireland this week
20 Unisex Irish Baby Names That Are Absolutely Magical
RTÉ 2 wins rights to Harry and Meghan's Oprah interview
McDonald's have reopened 6 drive-thrus in Dublin today and we're not crying, you're crying
Why I Can't Deal With People Who 'Hate Children'
You may also like
5 months ago
"She's already changed our world" Gigi Hadid and Zayn Malik welcome baby girl
10 months ago
Twitter's reaction to Zayn and Gigi's baby news is the lockdown content we need
10 months ago
Chrissy Teigen lost the run of herself announcing Zayn and Gigi's baby news
10 months ago
Breaking: Gigi Hadid is apparently pregnant and expecting her first child with Zayn Malik
3 years ago
Yolanda shares lovely photo of her Gigi Hadid, Zayn Malik and his mum
5 years ago
12 ways Gigi Hadid is inspiring our AW15 wardrobe
Next Page