It has been a mere week and a half since Vogue Williams and Spencer Matthews welcomed their second baby – a little girl – into the world on July 23rd.

And now – finally – the couple has revealed the name they picked for their daughter – and we can't help but think it's a seriously cool choice.

In a post on Instagram just hours ago, Vogue announced that their daughter is called Gigi Margaux Matthews.

Here she is! Gigi Margaux Matthews ❤️ The full shoot and interview is in @hellomag out tomo! Link in my bio ❤️ 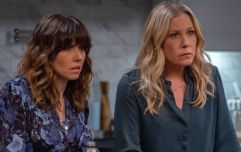 END_OF_DOCUMENT_TOKEN_TO_BE_REPLACED

The celebrity couple has introduced their beautiful baby daughter to the world with an exclusive photoshoot and interview in HELLO!HELLO! – and in the interview, which will be out in tomorrow's issue, revealed that her name, which until now has been a closely-guarded secret, is Gigi Margaux Matthews.

"Life is just wonderful. There really couldn't be more love in our house right now," Spencer gushes about life as a family of four.

"When we were discussing names I thought, 'I want to want her name', and I do. I just love it. I wish I was called it myself," says Vogue. "We decided on it ages ago and as soon as we saw her, we knew it suited her. She is so perfect. I am obsessed with her," adds the proud mum-of-two.

"I always really liked the name Margaux for a girl, spelt in the French way – like the wine," adds Spencer. "When people ask what she's called I always say Gigi Margaux – like my dad introduces me as Spencer George sometimes. It rolls off the tongue nicely."