Whenever I ask my children about what the best bit about their school day was, the answer is pretty much always the same – break time or PE.

Running around outside, being with their friends, coming up with games and generally just being active and in fresh air – that is what my children, most children, I would argue, love the very most.

We walk to and from school every day, but even so, personally, I think being active should play a much greater part in their school day than what it does at present.

Why? Because not only do periods of activity in between sitting still lead to a greater ability to sit down and learn, but also because we are only beginning to understand just how harmful all this sitting is to our overall health.

Worryingly, a 2018 US study showed that prolonged sitting, more than 6 hours a day, was associated with a higher risk of mortality from heart disease, cancer, and "all other causes." A recent paper released by UCLA professors encouraged college-aged students and faculty to get up and move during classes. The lead researcher, Angelia Leung, is a dance professor at UCLA. Leung, and the other researchers involved, found that many college students and faculty members were unaware of the health risks associated with prolonged sitting. They also found that students felt it was socially unacceptable to stand up and stretch during class.

As adults confined to our office desks, most of us can relate to how this isn’t really the most ideal position. Our posture and bodies suffer from sitting and craning our necks towards computers for too long.

We know all this sitting is bad for us, but it turns out this is hurting our children more than we think.

Writing in Principal, published by the National Association of Elementary School Principals, author Brad Johnson recently described the practise of sitting at school desks as “inhumane”.

He goes on to lists the health-related issues that arise from this: rising obesity (“One in three children in the US is overweight or obese — double the figures from the 1980s”), diabetes (“From 2000 to 2009, incidences of adult-onset (Type 2) diabetes in children and teens increased 30 percent”) and attention-deficit/hyperactivity disorders (“…5.7 million children age 6-17 who have been diagnosed with ADHD”). 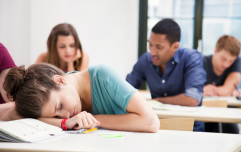 END_OF_DOCUMENT_TOKEN_TO_BE_REPLACED

These are scary numbers, and we know the same statistics are happening here.

“Beyond the obvious health-related issues, research sug­gests that sedentary education might be the reason that students’ creativity and intelligence are hindered through­out their formative years,” Johnson writes.

Interestingly, according to Christopher Bergland from Psychology Today, the ancient Greeks had a sound understanding of the importance of movement in education. Over 2,000 years ago, Aristotle established the 'Peripatetic' meaning: "Conversations while walking," which was the way his teachers and students interacted. They would walk around while teaching. Aristotle's school didn't have auditoriums filled with rows of tiny desks, and for a good reason. The Peripatetic school emphasized the need to move in order to exercise the brain.

While walking around while learning Irish or maths might be a bit of a stretch, Johnson absolutely recommends more movement for children – as this means more benefits for them in terms of learning.

“First, physical activity improves brain elas­ticity, which allows children to learn more easily," he writes. "Second, there is evidence that contact with the natural environment has a calming effect on children. And third, exercise releases endorphins (neurotransmitters that produce a feeling of well-being) that make children feel more relaxed."


popular
Stacey Solomon defends choice to let son play outside after receiving nasty messages
Stuck for Easter dinner? This lemon, rosemary, and salt-crusted lamb will have the whole family drooling
20 short-and-sweet baby names which are really big on personality
The largest family in Britain have just welcomed baby number 22
Lockdown: my child is upset that he might not get to say goodbye to his teacher
Woman demands her twin sister change her adopted daughter's name as she wants to use it
David Beckham shared his dinner on social media and we really wish he hadn't
You may also like
15 hours ago
Potty training too soon may actually be harming your child - and this is why
3 days ago
Children's health: Here is why you should never microwave sippy cups and bottles
1 week ago
Picky eaters: 10 super simple – but clever – tricks to try if your child won't eat ANYTHING
1 week ago
If you are still wearing shoes inside your house, it's about time you give up that seriously vile habit
2 weeks ago
Isolated and unsafe: ISPCC Childline reports an increase in calls since schools were closed
2 weeks ago
No school? No problem: Body Coach's Joe Wicks is now holding daily live PE lessons for kids
Next Page