Not to get ahead of ourselves, but we're excited.

We might be at the start of spooky season with Halloween not far away.

But the weeks seem to be just rolling into each other and we'll soon enough find ourselves all cosied up and ready to get into the festive spirit.

On top of sitting down to watch our fave Christmas classics, each year usually brings a selection of new Christmas films to indulge in.

One such offering this year comes out November 24 on Netflix, and it looks absolutely magical.

A Boy Called Christmas gives the legend of Santa Claus a new origin story that follows him in his childhood as he sets off into the snow in search of his father.

While the trailer doesn't give a whole lot away about the plot, it gives some insight into the movie's budget. 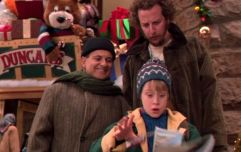 Here are all the big movies on TV on Christmas Day

END_OF_DOCUMENT_TOKEN_TO_BE_REPLACED

We're getting major HP and Narnia vibes from the trailer, so it definitely looks like a must-watch for families this Christmas.


popular
"You're disgusting": Prince William roars at photographer who was 'stalking' his family
Fashion expert tells mothers what to wear on school run to not look 'old and frumpy'
6 fun things to do in Dublin on your next family day out
TV drama about Maxine Carr is currently in the works
Mum gets mixed reaction to photo of her drinking beer while breastfeeding
Children wearing wrong-sized shoes and pyjamas in daytime as parents cut costs
Frankie Essex reveals the names of her twin babies
You may also like
5 months ago
According to tradition, your Christmas tree should stay put until after THIS date
5 months ago
Cheers! 3 delicious ways to pimp your Prosecco for New Year's Eve
6 months ago
Childline received over 1,000 calls from "anxious" children over Christmas
6 months ago
Mum seeks advice after her son catches her with his gifts from Santa
6 months ago
3 candle hacks to ensure a gorgeous scent in your home for Christmas
6 months ago
How to make the perfect leftover turkey sandwich, according to science
Next Page