Adam "only has eyes for Paige".

Love Island's Adam Collard has responded to claims that he cheated on girlfriend Paige.

The reality star was recently spotted with a blonde woman after a night out, but claims they're "just friends".

Fans slated Collard after he was spotted looking incredibly close to the blonde.

However, his representative has shut down claims he cheated on Paige.

He told The Sun, "His friends were alongside him when a group of girls asked for photos.

"Adam being his friendly self was open to posing and chatting to the girls, alongside other fans who wanted to chat in the same video.”

so adam collard is cheating on paige? or are they not together now ?? pic.twitter.com/N82XtUqzav 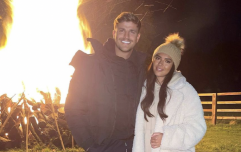 END_OF_DOCUMENT_TOKEN_TO_BE_REPLACED

“Adam understands how this video looks but wants to state that he left the restaurant with his friends and a box of 60 nuggets (with nothing or no one else) with the intention of getting home safely.”

“Adam and Paige are currently dating," his representative stressed.

They stressed, "Adam only has eyes for her."

Adam and Paige have been dating since they met on the 2022 series of Love Island.

Paige was originally coupled up with Jacques but they ended things after the sportsman quit the show.

Paige has not addressed the cheating rumours.

popular
Parents told to stop buying selection boxes for kids- here's why
People are realising what the red Christmas lights are actually for
Opinion: He may be a politician, but Leo Varadkar's personal life is none of our business
Expert says Cocomelon acts "as a drug" to kids' brains
Kelsey Parker: "People think I should be walking around wearing my black veil"
"Losing a baby is the ultimate loss, but to watch on over a video call is soul destroying"
4 ways to fix hard slime with ingredients you probably already have at home
You may also like
4 weeks ago
Olivia Attwood 'heartbroken' following I'm A Celeb departure
1 month ago
Love Island's Shaughna Phillips announces pregnancy
2 months ago
Davide Sanclimenti reveals hopes to have children with Ekin-Su
2 months ago
Jacques O'Neill says he's been sent death threats since Love Island
2 months ago
Gemma Owen reportedly set to star in show about footballers' daughters
3 months ago
Laura Whitmore reveals she wasn't allowed to ask Love Island contestants if they were okay
Next Page