A lovely gesture from the Irish icon.

A Cork family who was burying their mother last Wednesday got a huge surprise when Daniel O'Donnell sang live at the graveside.

Margaret McCarthy from Innishannon passed away last week after a short illness and was a massive fan of the Irish legend.

Because of this, Margaret's daughter Ann wanted to play O'Donnell's song 'Beyond the Rainbow's End' at the graveside.

As the family was getting ready to play the track, the undertaker Robert Gabriel pulled Ann aside.

Ann Phayer told C103's Cork Today Show: "He said that most people would have a recording and I was thinking 'oh my god, there's a problem now with the recording and they won't be able to do it.'

"Then, when he said that we actually have the man himself Daniel, I just couldn't believe it."

O'Donnell was on the other end of the phone line and sang the song live.

As for how this happened, O'Donnell explained: "We got a message from a lady called Delores. A few years ago, we did some work with Hidden Hearing and Delores works for the company and she's a friend of Ann's sister. 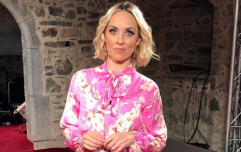 END_OF_DOCUMENT_TOKEN_TO_BE_REPLACED

"She sent a message just telling us that Margaret had passed away and about how she enjoyed the music."

Upon hearing the news, O'Donnell left a message on RIP.ie for Margaret before going one step further.

Having tuned into the live stream of the mass and after being moved by the proceedings, O'Donnell decided to give the undertaker a call to try to organise to sing at the graveside.

Reflecting on the event, Ann said: "It was just amazing how it happened."

Even more amazing was that O'Donnell sang 'Beyond the Rainbow's End' without knowing that was the track the family was going to play.