It's actually so sweet.

If you're a massive fan of Gilmore Girls (which I am), then you'll probably remember when Rory decided to reconcile with Logan all because of a letter than her mother gave her.

Now I'm not going to lie I always assumed it was just a prop letter with nothing actually written on it but as it turns out there were some wise words of wisdom written on that piece of paper and we finally know what they were. 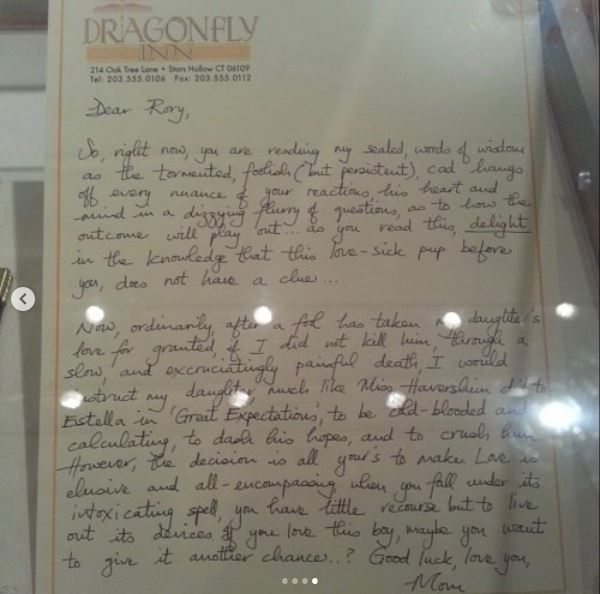 The photo of the letter was taken by a Gilmore Girls fan who took a tour of the Warner Brothers lot and snapped a picture of the relationship-saving letter Lorelai delivered to Rory via Logan during S6:E12.

It's even on Dragonfly Inn stationary, I mean can you deal?

While during the episode on Gilmore Girls Rory never reads the letter aloud we now know what it was that Lorelai said that helped get Rory and Logan back together;

"Dear Rory, So, right now you are reading my sealed words of wisdom as the tormented, foolish (but persistent) cad hangs off every nuance of your reactions, his heart and mind in a dizzying flurry of questions as to how the outcome will play out…

As you read this, delight in the knowledge that this love-sick pup before you does not have a clue… Now, ordinarily, after a fool has taken my daughter’s love for granted, if I did not kill him through a slow and excruciatingly painful death, I would instruct my daughter, much like Miss Havisham did to Estella in ‘Great Expectations’, to be cold blooded and calculating, to dash his hopes, and to crush him.

However, the decision is all yours to make. Love is elusive and all-encompassing; when you fall under its intoxicating spell, you have little recourse but to live out its devices. If you love this boy, maybe you want to give it another chance…?

We always knew Lorelai was wise but this letter just confirms it and is the sweetest mama bear letter ever.


popular
Parent's Benefit Leave extended from today - here's what you need to know
Vicky Phelan shares message of support with Charlie Bird as she deals with pain
"You're disgusting": Prince William roars at photographer who was 'stalking' his family
I tried 'slow parenting' for a year and I'm never going back
Teenager dies following road traffic collision in Kildare
6 fun things to do in Dublin on your next family day out
Expert says Cocomelon acts "as a drug" to kids' brains
You may also like
7 months ago
"I smell snow" - a list of all eight Gilmore Girls Christmas episodes
8 months ago
Matt Czuchry says he knows who the father of Rory’s baby is on ‘Gilmore Girls’
10 months ago
Here are 5 shows you're bound to love if you're a Virgin River fan
5 years ago
Calling all Gilmore Girls fans: There could be even more new episodes on the cards
1 week ago
Emma Thompson's "fat suit" in Matilda sparks heated debate
1 week ago
X Factor star Tom Mann's fiancée dies on their wedding day
Next Page