Here's why Gemma Owen can't talk about her PLT deal

She is not currently allowed to discuss it.

Yesterday, the fast-fashion retailer PrettyLittleThing announced that Love Island star Gemma Owen would be coming on board as their new brand ambassador.

While some fans rushed to congratulate Gemma, others felt that the brand had ignored Indiyah, after they ran a Twitter poll asking who should be the next ambassador and Indiyah won the most retweets.

Gemma, however, has not directly mentioned the deal herself on her own Instagram page, and it appears that she can't due to another contractual obligation.

Yesterday, she posted a quick Instagram story which read: "So desperate to speak to you all about my very exciting news but at the moment I'm not allowed due to previous contractual obligations. Keep your eyes peeled." 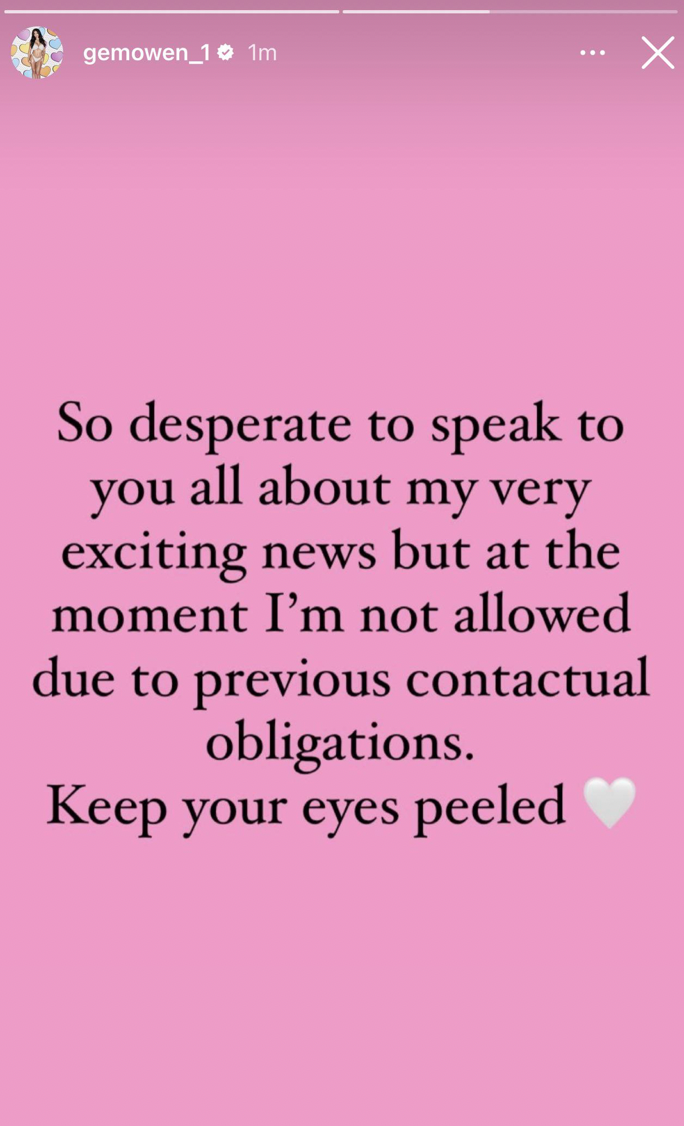 Over on Reddit, fans speculated that the previous contract she is talking about is simply her Love Island one, and that contestants have to wait until a month after the show before they can announce other business partnerships. One exception is Tasha, who announced her partnership with eBay. However, as eBay was an official sponsor of the show, it's possible that she was exempt from the contractual obligation.

Yesterday, PrettyLittleThing announced the news on their own Instagram page. Sharing a photo of Gemma signing her contract, they wrote: "IT'S OFFICIAL (...) Welcome to the PLT family @gemowen_1. We can't wait to show everyone what we're working on."

END_OF_DOCUMENT_TOKEN_TO_BE_REPLACED

While Gemma hasn't spoken about it directly, comments made by her were included in a statement from PrettyLittleThing shared with the MailOnline.

She was quoted as saying: "I wore PrettyLittleThing throughout my time on the show and now being announced as one of their newest ambassadors alongside some incredible talent including Love Island alumni is really special.

"The team has been amazing and I'm excited to get to work and start designing some collections for you all."

popular
This is everything women need to know about ovarian cysts
Study says that dads get more sleep than mums and tell us something we don't know
These 40 baby names are set to trend in 2023
Bride asks for divorce day after wedding following groom's disrespectful cake stunt
Babies born in February have some pretty cool advantages – no, really – it's true
Police believe they know what happened to missing dog walker Nicola Bulley
Shows like Bluey and Peppa Pig are actually bad for kids, expert warns
You may also like
5 days ago
Dani Dyer reveals the gender of her twin babies
1 week ago
Montana Brown hints at when her baby's due date is
1 week ago
Dani Dyer reveals she's expecting identical twins
1 week ago
Tommy Fury will fly to Saudi Arabia just weeks after Molly Mae gives birth
2 weeks ago
ITV announces new Love Island spin off for middle aged singles
2 weeks ago
Love Island star Dani Dyer reveals she's pregnant with twins
Next Page