Users felt it was inappropriate to comment on her "bounce back" given her previous battle with eating disorders.

On Tuesday, the Grammy-winning songwriter, 72, shared a photo of his 37-year-old wife lounging in a bikini.

"What baby!" he captioned the post, in reference to the American Idol alum's figure following the birth of their son Rennie earlier this year.

The post attracted significant criticism from those who felt it was inappropriate to comment on postpartum bodies or the bodies of those who have previously battled with eating disorders (as McPhee has).

"This is not a normal comment to make about a pregnant woman’s body, let alone the body of someone who has recovered from an ED," one wrote.

"It’s also really toxic and harmful to women in general to post this in a public forum. It is not aspirational nor 'goals' for women to feel pressured to maintain flat stomachs while they are pregnant."

END_OF_DOCUMENT_TOKEN_TO_BE_REPLACED

"It’s not a great flex or a supportive spouse when she’s known to struggle with an eating disorder. Maybe talk about her spirit or her heart or talent or brain instead," another said.

Other Instagram users took jabs at the couple's age gap and Foster's numerous marriages, suggesting he pressured his fifth wife to "bounce back" from pregnancy and labour.

"You’d leave her if she didn’t 'bounce back' right away and we all know it. Also, this is especially gross of you because she has suffered from an eating disorder in the past," someone wrote.

"Your trophy is lovely," another jabbed, to which McPhee replied "Lollll" alongside some laugh emojis.

McPhee then came to her husband's defence on her own Instagram page alongside another swimsuit photo.

"Ok the press around my husband's photo he posted of me is so dumb… so I hope this photo helps," she wrote. "I'm sorry but we are not sorry. And for all of you who can't deal with it maybe this helps. 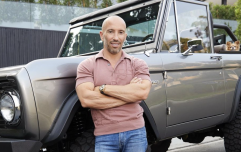 END_OF_DOCUMENT_TOKEN_TO_BE_REPLACED

"I've struggled with weight my whole 20s and 30s. I've gone up and down 10 times over. Does that make you feel better? There is nothing wrong with that - most people do.

She continued that she lost her baby weight "without dieting" and was pressured by neither herself nor anyone else.

"Diets are the worst and I've had zero pressure from anyone. I've let me body do its thing and found a great workout. That's it. And guess what? I'll probably gain weight again at some point too. Who cares?"

McPhee added that the people annoyed about her husband's post need to "seriously get a life" and "stop being so offended by what people post who have zero impact on your life".

"Maybe you should have more of an attitude of like, let's say… 'oh that's nice he thinks his wife is hot.' I cannot with this overly sensitive society right now. But as Taylor Swift said haters gonna hate," she concluded.

McPhee and Foster welcomed Rennie in February of this year after marrying in June 2019. The couple's baby boy is McPhee's first child.

popular
Breaking: Female child found with severe injuries in Co. Clare
Vaccine programme to roll out in primary schools
Fans defend Khloe Kardashian for posing in hospital bed with her newborn
School threatens to suspend pupils who don't follow "outdated" uniform rules
Budget 2023: IVF to be publicly funded and free contraception for under 30s
Princess Charlotte doesn't have to bow to the Queen but Prince George does - here's why
Girl found injured in Co. Clare house is in critical condition
You may also like
1 week ago
Daniel O'Donnell is selling his Ballinteer penthouse for €760k
2 weeks ago
Brian Dowling's sister Aoife reunites with newborn 5 days after giving birth
3 weeks ago
Lea Michele addresses Glee cast bullying claims
3 weeks ago
Leonardo DiCaprio and Camila Morrone have broken up
4 weeks ago
Lauren Goodger says she is "on road of recovery" in update to fans
1 month ago
It's a girl! Leona Lewis and Dennis Jauch welcome their first child
Next Page