The reality TV star also shared North's go-to diss for when she wants to push her buttons.

Kim Kardashian has revealed her "biggest parenting fail" and let us tell you, it's a relatable one.

The reality star got real about parenting for an episode of Mom Confessions, a digital series on Ellen DeGeneres' content platform, Bubble.

During the episode, Kim had to reveal some home truths by answering some quick-fire questions on motherhood and parenting.

The beauty mogul seems to think it's better to bribe than to lie though, admitting she favours an honest parenting approach.

“I really try not to lie to my kids,” she said. “I was doing that at the beginning to try to get them out of the house or to try to go into a play date or things like that, and I just realized quickly that it wasn’t going to work for me and I’d rather be honest with my kids.” 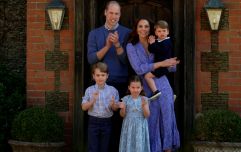 END_OF_DOCUMENT_TOKEN_TO_BE_REPLACED

Kim also revealed the meanest thing one of her kids has ever said to her, and unsurprisingly, it came from eldest daughter North, 8.

“Every time I get into some kind of disagreement with my daughter North, she thinks this is a dig to me, and she'll say, 'Your house is so ugly, it's all white! Who lives like this?'” she explained.

“She just thinks it, like, gets to me, and it is kind of mean because I like my house,” Kim said of her mansion's minimalist interior.

Elsewhere in the episode, Kim admits she's creeped out "on another level" by her kids' fascination with spiders and bugs.


popular
Parents with different surnames are being asked to carry their child's birth cert to travel but is it legal?
Young woman suffers "life-changing injuries" after being hit in face with firework in Galway
20 Unisex Irish Baby Names That Are Absolutely Magical
Can you pronouce these 7 'unique' baby names? They're trickier than you think
Blake Lively slams paparazzi for sharing 'disturbing' images of her daughters
Cute! 17 under-the-radar baby boy names you have never thought of before
Stuck For a Baby Name? Let These Online Generators Do The Work For You!
You may also like
4 days ago
Opinion: Unstructured play is vital for kids, so we need to stop entertaining them
6 days ago
Apparently, getting your kids up and ready for school is equivalent to an extra day's work
6 days ago
3 fun (and relatively mess-free) bath time tricks every parent should be armed with
1 week ago
The internet is praising this mum's life lesson for her ungrateful daughter
1 week ago
Expert claims parents should stop lifting baby's legs when changing their nappy
1 week ago
Musings: In a world where my children can be anything, I just want them to be kind
Next Page