Michael D. will be making an appearance.

Tonight's edition of The Late Late Show on RTÉ One will not go ahead quite as planned following the death of Queen Elizabeth II yesterday.

To reflect on her life, host Ryan Tubridy will be joined by the President of Ireland Michael D. Higgins, while the appearance of a few guests will be postponed.

In a statement, a spokesperson for the national broadcaster said: "In light of the passing of Queen Elizabeth II, President of Ireland Michael D Higgins will speak about the Queen’s relationship with Ireland, the importance of her state visit here, her legacy and his return visit to the UK.

"Ultimate Hell Week: The Professionals interview will be postponed for a later date."

Earlier this week, it was announced that former Miss Ireland Pamela Uba, actress Fiona O'Carroll and social media star Tadhg Fleming would be joining Ryan on the couch to chat about their time on Ultimate Hell Week: The Professionals. 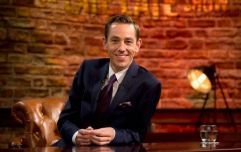 END_OF_DOCUMENT_TOKEN_TO_BE_REPLACED

Meanwhile, Hollywood stars Julia Roberts and George Clooney are still expected to swing by as planned. The pair will be chatting to Ryan about their new film Ticket to Paradise.

Yesterday, Michael D. Higgins issued a statement paying tribute to Queen Elizabeth II. In it, he expressed his "heartfelt sympathy" to the royal family, and offered his condolences to the British people and the members of the Commonwealth.

He also spoke about the Queen's historic state visit to Ireland in 2011.

"Queen Elizabeth’s Visit was pivotal in laying a firm basis for an authentic and ethical understanding between our countries.  During those memorable few days eleven years ago, the Queen did not shy away from the shadows of the past. Her moving words and gestures of respect were deeply appreciated and admired by the people of Ireland and set out a new, forward looking relationship between our nations – one of respect, close partnership and sincere friendship."

popular
Man sues friend for £1.9m after she refused to be his girlfriend
These 40 baby names are set to trend in 2023
'He's a changed man': Woman marries her 'high school bully'
Little boy dies of cancer after doctors ignored mother's concerns six times
Bride asks for divorce day after wedding following groom's disrespectful cake stunt
'We want a family': Suzanne Jackson on having kids with husband Dylan
Police believe they know what happened to missing dog walker Nicola Bulley
You may also like
2 months ago
Ryan Tubridy hints at this year's Toy Show theme
2 years ago
Toy Show's Adam's 'A hug for u' to light up city centres tonight
2 years ago
CNN's Donie O'Sullivan will be on the Late Late Show tonight
2 years ago
Dolly Parton among guests for the Late Late Country Special this week
2 years ago
Domhnall Gleeson is on The Late Late Show this week
3 years ago
The lineup for tonight's Late Late Show is a very interesting one
Next Page