The film adaptation of Matilda: The Musical is coming next Christmas

A new movie adaptation of Matilda: The Musical is set for release next year.

Matilda is a film, but it's also a musical. That musical is of course based on the Roald Dahl book of the same name, but now that musical is being turned back into a film, set to be released next year, on the silver screen. Still with us? Great.

The new stage adaptation will be released in cinemas by Sony Pictures U.K. and Tristar Pictures ahead of Christmas 2022, before making its way to Netflix for the holiday season. 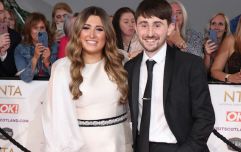 END_OF_DOCUMENT_TOKEN_TO_BE_REPLACED

The film will be directed by Matthew Warchus, who directed Matilda The Musical for the West End and Broadway. It's being produced by Tim Bevan and Eric Fellner of Working Title, and Jon Finn and Luke Kelly from The Roald Dahl Story Company.

The screenplay is being adapted by Dennis Kelly, and original music and lyrics have been written by Tim Minchin.


popular
Woman hands herself in after allegedly killing newborn and claiming she miscarried
Level 5: 10 really cool colouring pages to print and colour in from Pinterest
20 Unisex Irish Baby Names That Are Absolutely Magical
4 ways to fix hard slime with ingredients you probably already have at home
"It will haunt me for the rest of my life": Mother and daughter die from Covid within days of each other
The 8 Most Memorable Times From My Childhood I Want To Share With My Kids
The only people obsessed with pets are the people who don't have children
You may also like
2 days ago
Pretty Little Liars fans are going to love new series One Of Us Is Lying
1 week ago
Peppa Pig's album has better reviews than Kanye's latest release
1 week ago
5 shows to binge while you wait for 'You' season 3
1 week ago
'Emily In Paris’ Season 2 is just around the corner – and here is everything we know
2 weeks ago
Netflix reveals 'You' return date as well as Joe and Love's baby name
2 weeks ago
Reese Witherspoon says she "did not have a lot of support" as a young mother
Next Page