'Moulin Rouge!' turns 20 and Nicole Kidman is just as nostalgic as the rest of us

Yep, it's been two whole decades since the Nicole Kidman and Ewan McGregor-starring musical brought its Parisian whimsy to our screens and had us whipping out the Kleenex.

The movie has become a cult classic in the 20 years since its release – even being named 'Best Film of the Decade' in a 2010 survey by Lovefilm – and it's not hard to see why.

Never has a movie been so flamboyant, melodramatic, romantic, kitschy and tragic all in one go. Its story of ill-fated, star-crossed lovers makes it an epic, but its bells and whistles make it a masterclass in camp.

From scenes of burlesque glamour, to musical covers of songs that most definitely weren't around in 1900, to Kylie Minogue guest-starring as an absinthe trip-induced fairy (who sings 'the Sound of Music' before giving a scream that was actually voiced by Ozzy Osbourne), the entire movie feels like a fever dream.

Yet the joyous ridiculousness of it all only makes the tragedy hit harder, which is probably why it's still celebrated all these years later.

Well, that and the fact that it gave us the iconic rendition of 'Lady Marmalade' by Christina Aguilera, Mýa, Pink and Lil' Kim. 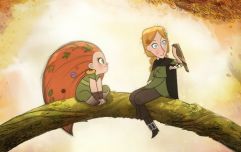 END_OF_DOCUMENT_TOKEN_TO_BE_REPLACED

Nicole Kidman herself was feeling nostalgic, taking to Instagram to share some behind-the-scenes and press photos from the time. "Some of my favorite memories from #MoulinRouge!" she wrote. "The greatest thing you’ll ever learn is just to love, and be loved in return."


popular
This mum can't understand why no one likes her 'teacher gift' idea
A controversial new sex education programme for catholic primary schools is causing uproar
FM104 apologise for "making light" of voicemail from 4-year-old boy with additional needs
This 23-year-old is mother to 21 kids... and she wants MORE
Child dies in tragic paddling pool accident in Co. Roscommon
"My sister-in-law stole my baby name and now she's mad I'm still using it"
You can buy this incredible Outdoor Inflatable Play Centre at Aldi!
You may also like
7 months ago
Apparently, Hugh Grant would agree to a Notting Hill 2 – on these conditions
1 year ago
#entertainingathome: J.K. Rowling just launched a brand-new online Harry Potter universe
1 year ago
#Covid19: Dublin's drive-in movie theatre cancels screenings due to government restrictions
1 year ago
Downton Abbey creator confirms plans to start work on a sequel
1 year ago
David Attenborough's spectacular new documentary will be shown in Irish cinemas with a Q&A after
1 year ago
Inside Out is on BBC One today and that's our Saturday afternoon sorted
Next Page