The script for the Sex and the City reboot got leaked... and it's not looking good for Carrie and Mr. Big

Some pretty major spoilers ahead.

Earlier this year, it was announced that Chris Noth would indeed be reprising his role as Mr Big on the Sex and the City reboot, titled And Just Like That.

Throughout the show's history, Mr Big has become a fan favourite, and many viewers were happy to hear of his return.

However, those expecting Carrie and Big's relationship to be peachy may be in for a bit of a shock.

A leaked script from And Just Like That suggests that there has been some trouble in paradise for this power couple.

American tabloid Page Six obtained an "exclusive glimpse" of the script, and one scene suggests that Carrie and Big have gotten a divorce.

The scene sees Carrie (Sarah Jessica Parker) spilling the tea with her girlfriends and the star casually drops in a reference to her separation. 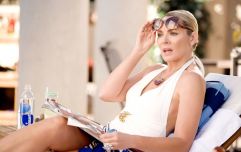 What happens to Samantha on the SATC reboot? Fans might've guessed

END_OF_DOCUMENT_TOKEN_TO_BE_REPLACED

Carrie says: "I was taping the podcast, I was washing my hair. Yes, I wasn't eating or sleeping, but at least I felt good about my marriage. Now I'm just one of the wives he was taking care of?"

When we last caught up with Carrie and Big, he had presented Carrie with an engagement ring at the end of the second Sex and the City movie.

Now, however, it seems as though they're yet to reach their happy ending.

Additionally, one of his ex-wives, Natasha Naginsky (Bridget Moynahan) was spotted on set in New York. Whether or not her character has something to do with Big and Carrie's relationship woes remains to be seen.

In any case, we shall have to wait until And Just Like That hits our screens to get the full scoop. The ten episode long reboot will catch up with Carrie, Charlotte (Kristin Davis) and Miranda (Cynthia Nixon) and explore their cosmopolitan lives all these years later.

The show is expected to air some time next year.


popular
Social experiment finds pregnant women regularly refused the use of public toilets
Mum issues warning to parents after son's bruises led to cancer diagnosis
Mum sparks debate after banning her son's bully from birthday party- was she wrong?
Dear Americans: Not only do we have Halloween in Ireland, we invented it
Toddler left screaming from being scalded by tub of KFC gravy
Opinion: All schools should have generic school uniforms
Opinion: Taking Communion out of school system will sort the believers from the non-believers
You may also like
2 months ago
The first snapshots from the new Sex and the City Reboot is here – and it looks AMAZING
3 months ago
The men of Sex and the City are also making a comeback in And Just Like That
8 months ago
Sex and the City reboot confirmed for HBO
1 year ago
Sarah Jessica Parker's conspiracy theory about Sex and the City is absolutely wild
3 years ago
The Sex and the City star who could be New York's next Governor
3 years ago
Kim Cattrall hits out at 'cruel' Sarah Jessica Parker in Instagram post
Next Page