It's official! The Olympia Panto will return this Christmas

It's official. The Olympia Panto will return to the theatre this Christmas.

Following the Government's announcement, the theatre confirmed that the family show will return this winter.

This year's show is Olly, Polly, and the Beanstalk.

The Panto returns on December 22 and will run until January 9.

"We’re back it’s “bean” too long! After some GIANT news we’ve all “BEAN” waiting on, we are delighted to welcome you back for this year’s spectacular Olympia panto, Olly, Polly, and The Beanstalk." 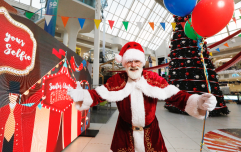 The Dublin Santa experience you can't miss this year

END_OF_DOCUMENT_TOKEN_TO_BE_REPLACED

The team wrote: "We’re beyond excited to have a live audience again and are back with big surprises and even bigger laughs."

Panto star Ryan Andrews said he cannot wait to have a live audience back in the Olympia.

He told RTÉ: "We’re going to have a brilliant time interacting with a live audience once again. You just can’t beat a panto crowd for audience participation."

"We’re really looking forward to this. It’s going to be a fun show with a laugh-a-minute script, dazzling dancers, and all-star cast," he added.

Tickets are available via Ticketmaster.

There's no doubt the return of the Olympia Panto is going to make this Christmas feel that little bit more magical for many families.

popular
Andrew McGinley honours his children on their third anniversary
Expert says Cocomelon acts "as a drug" to kids' brains
Infant boy dies in tragic accident in West Cork
Mum who lost baby after home birth claims maternity hospital failed to share medical details
Barry Keoghan dedicates Oscar nomination to his baby son
The reason why babies usually say 'dada' first has been revealed
Paris Hilton and Carter Reum welcome their first child together
You may also like
2 weeks ago
Mum-of-six has already bought and wrapped presents for Christmas 2023
4 weeks ago
Leaving your Christmas lights up is actually good for your mental health
4 weeks ago
Jonnie Irwin hasn't told his kids this could be their last Christmas together
1 month ago
Opinion: Christmas jumpers are fuelling a global eco disaster
1 month ago
This simple hack will make your fake tan last WAY longer over Christmas
1 month ago
The 10 biggest causes of family arguments on Christmas Day
Next Page