It's pretty tough for her.

Binky Felstead and JP Patterson split up earlier this year.

The couple have a daughter, India, and are both very much involved in her life.

However, Binky recently opened up to the Sun about the split.

"It was literally a mutual decision. Things hadn’t been right for a while, but we’d kind of painted over it."

"I think doing that was unfair on India as well as ourselves. We can’t stick together just because we have a baby."

Despite the fact that the split was very amicable, Binky revealed that she has concerns.

"Josh will find someone very quickly, and that kind of scares me," she admitted. 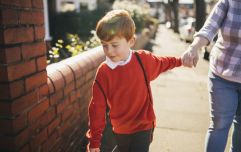 END_OF_DOCUMENT_TOKEN_TO_BE_REPLACED

"The scariest thing for me is thinking about being on my own, and how am I going to meet someone again when I have a baby? Because who wants to think about being on their own."

Ah our heart breaks for her.

"Of course, hopefully one day, but I’m not there yet. I’m not even thinking about that," she added.

"As long as Josh and I are in a good place together that’s all that matters, because that’s what’s perfect for India."

Bink Falstead has also previously discussed the fact that not much has changed, and that her and JP talk every day.

"We've both been really amicable."

"Josh is still seeing India whenever he wants. This will absolutely not affect her. He still comes over and we put her to bed together."

"So actually, not much has really changed."

It is so great to see this pair getting on so well, for the sake of their lovely daughter.


popular
Britney's not allowed have babies or paint her kitchen — Here's everything you need to know about her conservatorship
Irish couple whose healthy pregnancy was terminated after incorrect FFA diagnosis settle in court
Same-sex couple give birth just 13 days apart: "It's like having twins, but from different bodies"
Aldi's new garden collection includes massive waterpark and 14ft rattan pool
9-month-old boy drowns in Father's Day tragedy
Safety expert warns against leaving kids’ bedroom doors ajar at night
These 5 foods could increase your chances of having twins
You may also like
2 weeks ago
Made in Chelsea's Binky Felstead shares baby boy's unusual name
1 month ago
Made in Chelsea's Louise Thompson announces pregnancy with Ryan Libbey
2 years ago
Emma Louise Connolly reveals her plans for a traditional wedding with a modern twist
2 years ago
Binky Felstead talks life as a single mom six months since split from Josh Patterson
2 years ago
Vogue Williams' son, Theodore, just reached a pretty major baby milestone
2 years ago
Vogue Williams got SUPER real about life as a new mum in her latest Instagram
Next Page