Love is not real and it never was.

Over the years, Coronation Street's Sarah Platt has had her fair share of fellas.

Sarah and Gary have a pretty solid thing going. They're planning to get married, they have a nice time together, they seem to get on.

However, there's been rumblings and rumours abound that one of Corrie's most iconic couples are going to split up - and actor Tina O'Brien has pretty much confirmed that it's true.

She told ITV that Gary will confess to Sarah that he's been lying to her and that he's in a lot of debt to a loan shark. 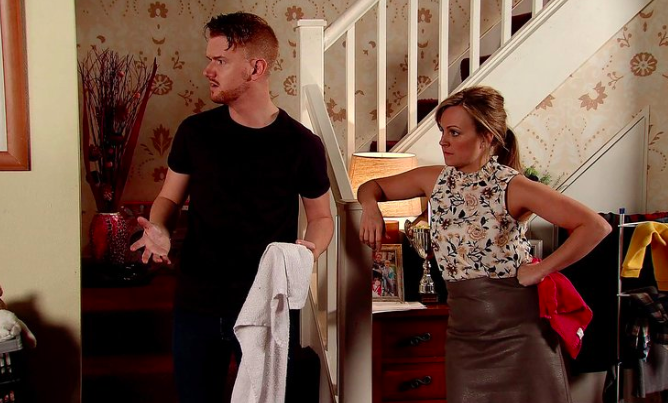 Although Sarah knows that debts aren't the worst things in the entire world, she feels betrayed by Gary and isn't all that delighted by his behaviour.

So much so that she doesn't know if their relationship is going to survive.

"Sarah is so shocked," said Tina.

"She had absolutely no idea what was going on. Gary very convincingly told her that the reason he had some money was that he got paid for a job in advance and I don't think she had any reason to doubt him.

"She believed the days of him lying to her were over. There's been a lot of financial pressure on them recently, but she trusted him."

O'Brien went on to say that Sarah is very much of the (correct) opinion that relationships need to be built on trust and respect - two things she hasn't been seeing in her relationship with Gary.

Gary's caught between a rock and a hard place - how's he going to get out of trouble this time? #Corrie pic.twitter.com/NqMx22apd8

"I don't know how much more of this she can take," she said. "It remains to be seen whether they can get through this."

"It's a question of whether the relationship can survive much longer when there's such a lack of communication. She's quite a tolerant partner, but she's sick of the lies.

"In the past I would have said they could have got over this, but this time I'm not sure. At this point, although Sarah still loves him, she's very doubtful whether they have a future together."


popular
Stacey Solomon defends choice to let son play outside after receiving nasty messages
#Covid-19: "I was shamed for being there and my child left crying' – a single mum on food shopping during lockdown
Stuck for Easter dinner? This lemon, rosemary, and salt-crusted lamb will have the whole family drooling
The largest family in Britain have just welcomed baby number 22
Ricky Martin has shared the first photos of his five-month-old son Renn
David Beckham shared his dinner on social media and we really wish he hadn't
Lockdown: my child is upset that he might not get to say goodbye to his teacher
You may also like
6 days ago
Corrie's Jack P. Shepherd shares throwback photos to celebrate 20 years on the soap
1 week ago
Real life Corrie couple Sally Carman and Joe Duttine have gotten engaged
1 month ago
Corrie's James Burrows has landed his first role after leaving the soap
1 month ago
Coronation Street star 'in self-isolation' over coronavirus worries
1 month ago
'The hardest goodbye': Corrie's Lucy Fallon pays tribute to Bethany Platt as her final scenes air
1 month ago
Coronation Street's James Burrows shares details about Ali Neeson's exit storyline
Next Page