Kathryn Thomas says wedding was 'the best weekend of my life'

"We laughed and danced non stop for three days..."

Kathryn Thomas has said that her wedding was the best weekend of her life.

The couple, and their 200 or so guests, attended the 12th century castle to exchange vows on Sunday.

They had been engaged for three years.

Kathryn has since called the wedding "the best weekend of a my life."

In an Instagram post featuring herself and McLoughlin hand-in-hand in the gardens of the estate, she thanked those involved in the wedding for making the weekend so special.

"Just back in the real world after the best weekend of my life with (Padraig and Ellie)," she wrote. 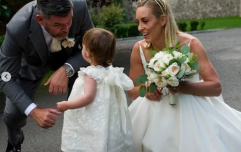 END_OF_DOCUMENT_TOKEN_TO_BE_REPLACED

" I put my phone away and surrounded by all our friends and family, who we love to the ends of the earth, I kid you not, we laughed and danced non stop for three days!!

"So many people helped us bring our ideas to life."

Kathryn then thanked each of the individuals and groups who contributed to the day, including photographer Shane O'Neill who captured the most important moments of the event.

Kathryn and Padraig got engaged back in 2016 but put off getting married when the presenter became pregnant with Ellie in 2017.

"It's just going to be a big party and it feels more special now that Ellie is here to celebrate with us," Kathryn said at the time.

She recently revealed that she was planning on having nine bridesmaids for the big day - as feat that was proving difficult given the short amount of time she and Padraig had to plan the wedding.

They are planning to go on honeymoon at a later date.


popular
Aldi makes going for short walks with the kids easier with their Buggyboard Mini
Ronan and Storm Keating have welcomed their second baby – and her name is the cutest
Hospitals start to request mothers not have birth partners amid COVID-19 outbreak
#Covid-19: Life cannot go 'back to normal' after Easter Sunday, says Simon Harris
The O'Brien Press just launched a competition where YOUR child could get to design the cover of an actual book
Holly Willoughby had the best comeback for Piers Morgan after he commented on her outfit
Bressie will be hosting mindfulness classes for kids on his Instagram Live
You may also like
1 month ago
Kathryn Thomas' Instagram post is the underwear photo we needed to see right now
2 months ago
Kathryn Thomas shares words of encouragement to anyone who had a bad start to 2020
11 months ago
'You feeling your best will benefit everyone around you too' Kathryn Thomas on keeping fit as a mum
1 year ago
Kathryn Thomas shares adorable tribute to mark daughter's first birthday
1 year ago
Kathryn Thomas posted first Christmas pic of her baby and mums are swooning over her
1 year ago
Kathryn Thomas plans to tell her daughter about her two miscarriages
Next Page