Kim Kardashian has said that her newborn son "looks just like" her daughter, Chicago.

The Keeping Up With The Kardashians star announced on Friday that she and her husband, Kanye West, had welcomed their fourth child.

Kim took to Twitter to confirm the arrival of their "perfect" boy, who was born via surrogate.

And while she hasn't shared a photo (or the name) of the newest member of the Kardashian-West family, the proud mum did tell her fans a little bit about about the little boy.

"I’m sure he will change a lot but now he looks just like her," she added. 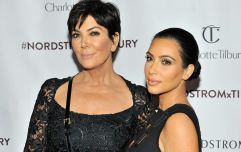 END_OF_DOCUMENT_TOKEN_TO_BE_REPLACED

The news that their surrogate had gone into labour was confirmed on Thursday, when Kourtney Kardashian surprised Kris Jenner on the Ellen DeGeneres Show.

She brought her three children - Reign, Penelope, Mason - as well as Chicago, Saint and North onto the show for a Mothers' Day surprise.

Kourtney explained that it had meant to be Kim who would appear on the show - however, their surrogate had gone into labour.

A visibly-shocked Kris asked her: "What! What are we doing here?! For how long?"

“And nobody knows, so everyone in the audience don’t tell,” Kourtney laughed.

It was first reported that Kim and Kanye were expecting their fourth child in January this year.

Kim confirmed the news a few weeks later, during an appearance on Watch What Happens Live with Andy Cohen.

“I got drunk at our Christmas Eve party and told some people. I can’t remember who I told because I never get drunk."

The couple are already parents to North, 5, son Saint, 3, and daughter Chicago, 1.