We all know how difficult it is to juggle everything when you have kids. With after-school activities, heaps of washing, homework and everything in between, it's not at all easy.

And now Mila Kunis has opened up about her family life in a recent interview, and said that if she had anymore she would feel overwhelmed.

Speaking to People, the actress said: “I will only have two. I have heard [moving from] two to three is hard.

She continued: “[It’s hard] when they outnumber you. Right now, we’re fine. 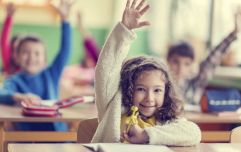 Five helpful back to school tips every parent should know

END_OF_DOCUMENT_TOKEN_TO_BE_REPLACED

Mila has two children with her husband Ashton Kutcher; daughter Wyatt, three-years-old, and son Dmitri who is nearly one year old.


popular
Anna Daly launches her cosy chic lifestyle brand, Little Bliss
Graham Norton launches new fizzy rosé just in time for festive season
The beautiful poem that sums up how all brand new mums are feeling right now
The Best Homemade Mincemeat Recipe (You'll Never Buy Supermarket Mince Pies Again)
20 Unisex Irish Baby Names That Are Absolutely Magical
Here's everything we know about the Call the Midwife Christmas special
Adam King is going to be on the Late Late Show tomorrow night
You may also like
6 months ago
Bernardos Ireland calls on Leo Varadkar to consider the needs of children during phased reopening
6 months ago
Taoiseach says rule on wearing facemasks does not apply to children under 13
8 months ago
Apparently, there is a common age kids should be allowed cross the street on their own, experts say
9 months ago
The Toothpaste Experiment is something that all parents should do with their kids
9 months ago
Mum faces criticism for the snack she put in her daughter's lunchbox (and it seems pretty harsh!)
10 months ago
Attention parents: Here's a technique you can use if your kids interrupt you
Next Page