Absolute scenes down in Áras an Uachtaráin.

President Michael D Higgins is getting a new pet pony, and by extension, a new friend for his dog Bród.

Both Bród and President Higgins lost their close companion earlier this year, when Síoda the Bernese mountain dog sadly passed away.

The president announced the news back in September, leading to an expected weekend of national mourning for the dog who had spent so many years by her master's side.

"Sadly we must report that Síoda has passed away after a short illness," the notice said at the time, alongside an image of Higgins and his dog.

And although Síoda can never be replaced, she can still live on in spirit alongside the latest addition to the Áras - a pony. 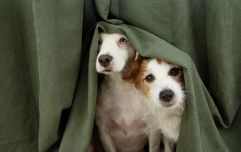 END_OF_DOCUMENT_TOKEN_TO_BE_REPLACED

A new deal between Áras an Uachtaráin and Kylemore Abbey means that a mare will soon be sent to Higgins' home to graze the ground, run around, and hopefully give Bród a bit of company.

According to The Irish Field, the pony will join Higgins and wife Sabina in their home annually between May and September.

Executive director Conor Coyne told the publication: "We had been in contact with the team in the Áras who are in the middle of putting biodiversity grazing strategy on the grounds and we are looking at doing something similar in Kylemore.

“We spoke about possibly sharing some of the animals and offered them a pony and a foal annually from May to September.”

Delightful scenes, all round.


popular
A mini heatwave could be coming our way in September
Gemma Owen spills the tea on how Luca gets on with Michael
Mum charged with murder after allegedly leaving baby in hot car
Vogue Williams slams man who refused to swap seats with her on plane
Adam Collard allegedly attacked on night out with Paige Thorne
Mum issues warning to parents over frightening Cocomelon video
Gilmore Girls star Alexis Bledel splits from husband of 8 years
You may also like
3 weeks ago
McDonald's increases menu prices due to rising inflation
1 month ago
This is why you should never use sunscreen past its expiration date
1 month ago
I tried out this weird hack to repel house-flies, and it actually kind of works
2 months ago
Pregnant bride goes into labour on her wedding day four before due date
2 months ago
Rebekah Vardy storms out of court just 30 minutes into final day
3 months ago
"We have tried everything": Podcaster Deborah James moved to hospice
Next Page