They were engaged for three years.

The Operation Transformation presenter tied the knot yesterday in the beautiful Kilkea Castle surrounded by friends and family.

The image shows the RTÉ presenter and her new husband walking hand-in-hand in the grounds of the 12th century castle following the ceremony.

"NK Management is delighted to confirm that Kathryn Thomas and Padraig McLoughlin have married in a ceremony in Ireland this afternoon," said the post.

Galway Now shared another adorable photo of the day of the couple alongside daughter Ellie.

The toddler is dressed in a white floral detailed dress with white booties to match. 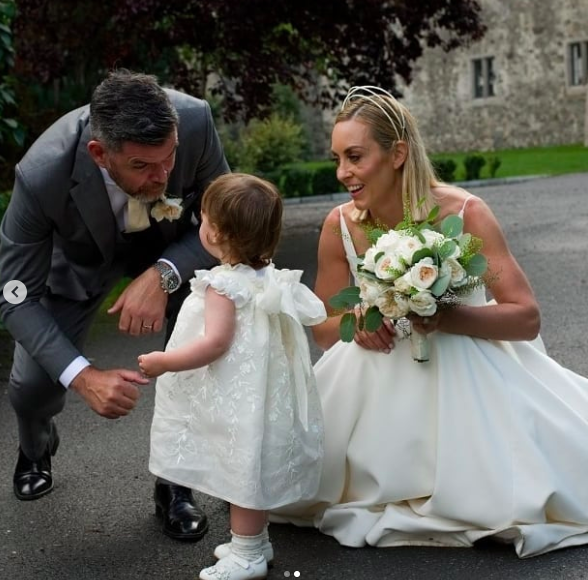 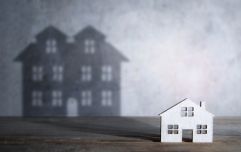 Looking to downsize your family home? RTÉ are looking for participants for 'Goodbye House'

END_OF_DOCUMENT_TOKEN_TO_BE_REPLACED

Kathryn and Padraig got engaged back in 2016 but put off getting married after the presenter became pregnant with Ellie in 2017.

"It's just going to be a big party and it feels more special now that Ellie is here to celebrate with us," Kathryn said at the time.

She recently revealed that she was planning on having nine bridesmaids for the big day - as feat that was proving difficult given the short amount of time they had to plan the wedding.

"I am busy ringing people up at the last minute asking them how to make this thing happen," she told Extra.ie.

"I always said, if you can’t organise a party in three months sure what are you at? Then I realised when you are talking about a wedding it is different."

Kathryn and Padraig met in 2013 when they were queuing to enter a pub on Baggot Street. He popped the question three years later while they were staying in Ballyfin House, Co Laois.

The couple had 200 guests at their wedding. They're planning a honeymoon to celebrate the marriage at a later date.


popular
Safety expert warns against leaving kids’ bedroom doors ajar at night
2-year-old boy hospitalised after swallowing 16 magnets from a toy
These 5 foods could increase your chances of having twins
Experts reveal why it's actually a good thing if you buy your child a toy and they only want to play with the box
As of today, every hospital in Ireland will have the same rules for partners attending maternity services
Newborn needs 13 stitches on her face after being "sliced" during emergency C-section
Brian Ormond surprised Pippa O'Connor in the most romantic way on their 10th wedding anniversary
You may also like
1 month ago
Seth Rogen joins Ryan for this week's episode of The Late Late Show
6 months ago
Late Late Toy Show accused of "using kids to promote vaccine"
6 months ago
Documentary on Fungie's disappearance and The Den Christmas special among highlights of RTÉ festive schedule
11 months ago
Follow-up to powerful documentary on Covid battle in St. James’ Hospital to air on RTÉ tonight
1 year ago
Lenny Abrahamson will be giving a film class as part of RTE's Home-School Hub
1 year ago
RTE are set to broadcast an hour of 'school on TV' everyday from Monday
Next Page