The powerful short film shows that pregnancy and athleticism are not mutually exclusive.

The ad, which features the legendary Serena Williams, is a powerful celebration of pregnancy, motherhood and female athletes.

The short film - which is officially titled Toughest Athletes - is being hailed for showcasing breastfeeding athletes. Viewers have also praised the ad for demonstrating that pregnancy and athleticism are not mutually exclusive.

The ad opens with a question: "Can you be an athlete? You pregnant?" 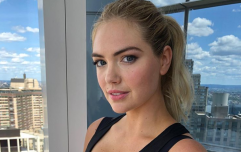 Kate Upton opens up about feeling 'so much pressure' to breastfeed

END_OF_DOCUMENT_TOKEN_TO_BE_REPLACED

"Motherhood looks different on everyone," the caption reads. "But no matter what you do or how you do it, you are the toughest athlete."

Too often, the media needlessly frames breastfeeding as a taboo. Until recently, depictions of breastfeeding mothers in films and television were quite rare.

However, in recent years, the conversation around breastfeeding has changed for the better.

Just last month, for instance, a commercial which captured the struggles of breastfeeding mothers aired during the Golden Globes.

Frida Mom - a postpartum company - were behind the deeply moving ad which highlights the challenges many mothers face, from leaking to clogged milk ducts to the pain of engorgement.


popular
Here's what bookies think Harry and Meghan will name their baby girl
Mother wants to exhume daughters body from her grave in Cork
Maternity hospitals can now begin to ease visitor restrictions says HSE director
10 rare Irish baby names not too many parents are using these days
"To all my friends with babies, I apologise."
Children with these names are statistically more likely to be successful
Abducted French girl, 8, found in Switzerland five days after disappearance
You may also like
1 week ago
Emily Ratajkowski is busy being a breastfeeding mum – and we are loving the candid snaps
4 weeks ago
Mums who have gotten the Covid vaccine are passing antibodies to their babies through their breastmilk
1 month ago
This is how much a moderate intake of caffeine effects your breastmilk
1 month ago
A Kildare nurse has become the go-to for online breastfeeding advice for Irish mums
1 month ago
WATCH: Honest ad about breastfeeding struggles airs during Golden Globes
2 months ago
Gut health: Breastfeeding found to 'profoundly influence' development of infant microbiome
Next Page