It's the world's deadliest health risk.

We all enjoy munching on some ~*bad*~ food, whether it's a burger, fried chicken, cake or doughnuts. However, we have to aim to eat them in moderation as it has been revealed that eating a bad diet is actually worse than smoking and causes more deaths each year.

130 scientists compared dietary habits to rates of death and disease in 195 countries and found that a bad diet claims more lives to smoking because it can cause heart disease, cancer and diabetes.

The main threats were diets that had a low intake of whole grains and fruits, and a high consumption of sodium. Diets that contained large amounts of red meat, processed foods and sweetened drinks were also found to be the worst.

Lead scientist Dr Ashkan Afshin, from the University of Washington, US, said: "Poor diet is an equal opportunity killer. We are what we eat and risks affect people across a range of demographics, including age, gender, and economic status. 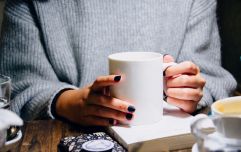 END_OF_DOCUMENT_TOKEN_TO_BE_REPLACED

"Dietary policies focusing on promoting healthy eating can have a more beneficial effect than policies advocating against unhealthy foods."

popular
Irish dad shares warning after his 12-week-old baby was hospitalised with RSV
9-year-old boy will "never be the same again" after Wexford dog attack
7 Christmas markets and Santa experiences to visit with kids this winter
Olivia Wilde wanted to work through issues with Harry Styles
There's a FREE Santa experience happening in Dublin
"I want to spend all my time with them": Vogue Williams on suffering from mum guilt
Expert says Cocomelon acts "as a drug" to kids' brains
You may also like
5 days ago
Watching Christmas movies is good for your health- here's how
6 days ago
83% of women call for time-off policies for severe period symptoms
3 weeks ago
Should you give your child a soother? Here's exactly what you need to know
1 month ago
Daytime naps should stop when child turns two, science claims
1 month ago
Expert reveals how often you should clean your child's bath toys
1 month ago
Parents beware: false widow spiders like hiding in socks and slippers left on the floor overnight
Next Page