Breakfast hack: Here's how to scramble an egg INSIDE its shell

There are relatively few ways to stun your family at the breakfast table.

In fact, since the advent of chocolate cereal and the invention of the Poptart, it seems humanity has stopped trying. Until now, that is.

What we're about to show you is something many of us never dreamed possible: another way to serve an egg, besides boiled, poached, fried or scrambled.

The golden egg has been scrambled inside its shell. It looks like this:

Served as you would as boiled egg, it can be sliced for sandwiches and salads and has a much richer, creamier, taste. 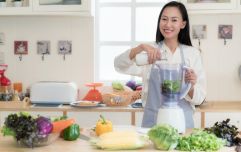 END_OF_DOCUMENT_TOKEN_TO_BE_REPLACED

Curious as to what manner of witchcraft had to be employed to take this humble ovum from lowly protein source to feat of breakfast engineering? All is revealed in this straightforward tutorial, for which you need only two items: eggs and, rather cryptically, a long-sleeved shirt.


popular
Aldi to limit number of Christmas toys customers can purchase
River Island has come under fire for selling clothing that 'should not be for children'
4 seriously clever parenting tips we should be taking from Danish parents
No bake Frankenstein Cake Pops to make with the kids over the mid term break
'We want a family': Suzanne Jackson on having kids with husband Dylan
Mask up: 10 super-cute facemasks we have our eye on right now
20 Unisex Irish Baby Names That Are Absolutely Magical
You may also like
2 years ago
French toast in a mug is the perfect treat for kids of all ages
2 years ago
15 store cupboard essentials that mean you ALWAYS have dinner sussed
2 years ago
These quick microwave poached eggs are ideal if you're on the go
2 years ago
This 20-minute dinner is the perfect meal for a lazy Sunday
3 years ago
Creative condiment: 10 other things to do with salt in the kitchen
3 years ago
Room to improve: 5 fast steps to an organised kitchen
Next Page