I think I am genetically hardwired to be obsessed with all things cinnamon.

I blame my Scandi roots for this. I mean; in my native Oslo – just like in any other city or town in Norway – and Sweden and Denmark for that matter – you can go into any bakery, no matter how small, and always, always find a variety of cinnamon buns. We love the stuff.

However, having seen this now-viral Instagram video by Danish influencer Frederikke Wærens posted on Instagram, I might never eat regular cinnamon rolls again – because this version, made in a waffle maker – just looks so utterly delicious.

And the best part? it could not be simpler to make: 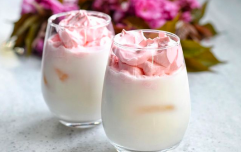 END_OF_DOCUMENT_TOKEN_TO_BE_REPLACED

"I’m never eating normal cinnamon rolls after I’ve tried cinnamon waffles! Omg so crispy and delicious! You simply just make the dough, roll it into cinnamon rolls, let the dough rise and then bake the cinnamon rolls for a couple of minutes in a waffle iron. Link in bio for my cinnamon roll recipe."

Hands up who are trying these immediately?

popular
4 ways to fix hard slime with ingredients you probably already have at home
Love Actually star reveals incredibly emotional behind-the-scenes story
After Stormi and Aire, here are 32 baby names also inspired by the elements
Shock after baby is discovered alone in pram late at night in Dublin
Remember Pugsly Addams? His real-life little sister is a HUGE star
10 easy (and sweet) ways that you can help children believe in themselves
Sustainable, sleek and very Scandi: We've had a sneak peek the new IKEA collection
You may also like
3 days ago
Not every parent will agree with this mum's stomach bug hack
2 weeks ago
This clever hack could help keep your toddler awake in the car
2 weeks ago
Dublin Airport worker goes viral for singing and dancing in security queue
4 weeks ago
Little girl heartbroken after only two people show up at her birthday for odd reason
3 months ago
Mum shares important warning after almost losing her newborn to a kiss
3 months ago
'Don't do it if you are a parent' – paediatrician warns against viral organising hack
Next Page