And today in not at all surprising news...

When it comes to cuisine, Dublin is known for a few things.

Coddle is one. Guinness pie is (unfortunately) another.

And then there's fish and chips - the holy grail of Dublin food, enjoyed by resident and tourist alike, always delicious no matter where you grab it from.

As it turns out though, there is one thing about Dublin fish and chips that makes it not so ideal: the price of it.

Just like rent, alcohol, and general cost of living, Dublin is again one of the most expensive in the entire world when it comes to fish and chips. 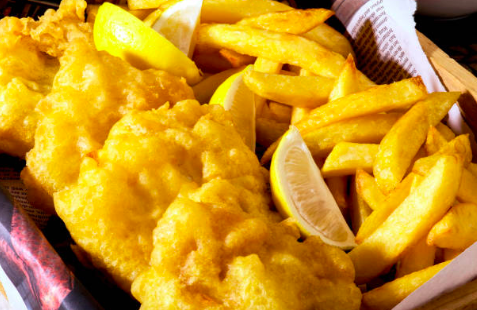 At the top of the list with the most expensive is Copenhagen, Denmark with the US's Alaska (randomly enough) coming in second.

Conducted by Tombola, the study showed that, on average, the most expensive fish and chips in the world comes in at a considerable €17.92. END_OF_DOCUMENT_TOKEN_TO_BE_REPLACED

That's in Copenhagen, but the price doesn't fare much better here in Ireland with the average meal costing customers around €16.20 in Dublin.

Harrowing data, all the same.

The full list of incredibly expensive fish and chips can be found below:

The more you know, wha?


popular
The €9 beauty buy both Kate and the Queen (and every beauty editor) is obsessed with
Mum accidentally names twins after TV show and now wants to change their names
Irish parenting blogger shares shower cap hack to keep pram wheels clean
New research finds a strong link between gut bacteria and a child's behaviour
3 easy (and fun) Halloween crafts to entertain the kids with over midterm
2020 parents apparently have ONE thing in common when it comes to picking baby names
10 extremely annoying things people need to stop saying to new mums
You may also like
22 hours ago
Krispy Kreme's latest range is exactly what our at-home Halloween celebration needs
4 days ago
Halloween at home: 3 spooktacularly delicious veggie dishes the kids will love
5 days ago
No bake Frankenstein Cake Pops to make with the kids over the mid term break
6 days ago
Domino's is giving away free pizza to Ireland's frontline care workers
1 week ago
Aldi's prosecco and wine advent calendars are back, and thank God for that
1 week ago
Forget coffee – whipped strawberry milk the new viral drink trend your life needs
Next Page