It's fair to say we all went a bit wild last year.

In September of 2018, Krispy Kreme arrived in Ireland after a lot of anticipation.

Hundreds of fans queued up to devour the doughnuts and we made so much of a ruckus that they had to stop their 24-hour drive-thru.

The hype surrounding the doughnuts has still not died down, as anyone seen with a Krispy Kreme box is given evil eyes as they walk by on the street... and don't even mention if someone brings a box of them into the office.

The only thing stopping people from buying the sweet treats is that it's based out in Blachardstown Shopping Centre... a while away for anyone that doesn't live in the surrounding area. 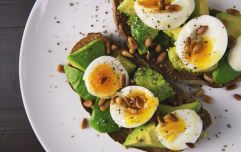 There's a new app that will bring you breakfast every morning

END_OF_DOCUMENT_TOKEN_TO_BE_REPLACED

Well, you'll be delighted to know that Just Eat has announced that Krispy Kreme is now available to order online and on the app.

"From tomorrow, Tuesday March 5, fans of the delicious Krispy Kreme doughnuts will have the chance to order this tasty treat straight to their door, as Ireland’s leading online food ordering and delivery app, Just Eat, agrees new partnership with the doughnut aficionados," the press release said.

Edel Kinane, Commercial Director at Just Eat Ireland, said: “We’re thrilled to launch exclusively with Krispy Kreme here in Ireland and have no doubt that Krispy Kreme fans throughout the city will be delighted to hear that they can now order their favourites for delivery. Our customers have always expressed a demand for wide variety, and we strive to exceed their expectations."

The delivery is only available to certain locations in Dublin, so be sure to check it out on the app before you order.


popular
New dad called 'demanding' over list of guidelines to visit newborn son
Frankie Essex reveals the names of her twin babies
"No co-sleeping at all" – new safe sleeping guidelines for babies states
Stacey Solomon shuts down cheating rumours as photos of Joe's stag-do emerge
6 fun things to do in Dublin on your next family day out
Irish parents already feeling the pressure over back-to-school costs
Girl (7) who died in Majorca was originally from Donegal
You may also like
3 months ago
About to give birth? Pack some peppermint oil in your hospital bag – trust me on this one
4 months ago
The golden hour: Skin-to-skin contact after birth benefits your baby – even 20 years later
10 months ago
Captured on video: Police deputy delivers baby in 7-Eleven carpark
10 months ago
This mother's labour lasted just 45 minutes using her doctor's new method
11 months ago
A mum labouring on the toilet went viral – and it made other mums rave about the position
1 year ago
The rising c-section rates among first-time mothers in Ireland strongly linked to age
Next Page