Mumsnet users were left horrified by a cake shaped like a dirty and overflowing diaper.

The controversial creation was shared in the Am I Being Unreasonable? section over the website, in a post called “In wondering who the F**K would order this cake?????????’”

One forum user shared the unappetising bake, labelling it “one of the nastiest cakes I’ve seen” - as she asked for other people to share their own “cake fails”.

“Now I like a joke as much as the next person.

“I even find those kids toys that poo and fart that are all the rage now marginally funny.

“But this has to be one of the nastiest cakes I've seen! Other cake fails anyone?” 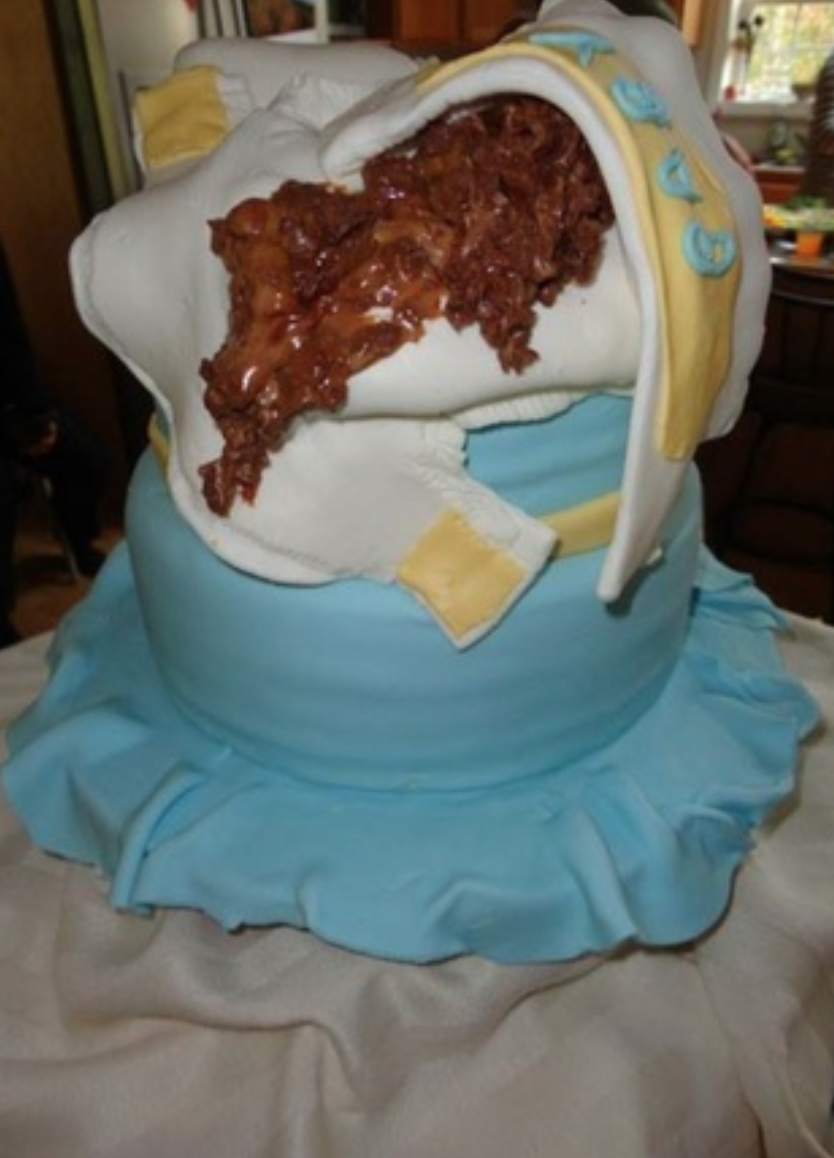 And while plenty of commenters were shocked by the OTT cake, others were happy to share their own encounters with controversial cakes.

"I once went to a baby shower where there was a childbirth cake complete with baby's head crowning, fake blood and even a little poo popping out of the icing bumhole!!!"

“It's not to my taste, but I imagine there's plenty of similar cakes ordered and eaten.”

The original poster later added some extra detail, commenting that it had first been posted online to advertise a local baker.

"I think it's a s***y nappy cake! Apparently it's mashed Milky Way.

"Some bloke put it on a local Facebook site to advertise his wife's cakes!

"I don't mind the birth ones so much for some reason.

"Or more solid looking poo. I think it's the runnyness that makes me [sick]."


popular
"The worst thing was finding her": Family of Santina Cawley pay tribute to toddler
Warning to parents about unknown hepatitis strain as death toll rises
We named our daughter after her grandmother but fear she will be bullied over unique name
Downton Abbey's Allen Leech reveals second child's gender in the cutest way
Karen Harrington found guilty of murdering toddler Santina Cawley
Saoirse Ruane's mum says her daughter has a tumour in her lung
Netflix announces the storyline for season 3 of Bridgerton
You may also like
3 days ago
Parenting confession: "My in-laws are gatecrashing our family holiday"
1 week ago
'Coastal grandmother' is the viral 2022 fashion vibe you did not see coming
1 week ago
A TikTok-er showed the size of an epidural needle, and yep, it's huge
2 weeks ago
Women are sharing pictures of their 'saggy' boobs on social media – and here's why
2 weeks ago
The internet calls this dad's reaction to viral TikTok gender reveal a 'big red flag
2 weeks ago
Jonathan Saccone Joly 'regrets' his social media fame and deletes all YouTube videos
Next Page