One of the 'nastiest' baby shower cakes has disgusted people online

How far is too far?

A woman has taken to the popular parenting forum Mumsnet, to share a picture of a cake she saw on Facebook. The cake in question was for a baby shower and included a dirty nappy as the design.

She posted the picture saying:

"Now I like a joke as much as the next person. I even find those kids toys that poo and fart that are all the rage now marginally funny.

But this has to be one of the nastiest cakes I've seen! Other cake fails anyone?" 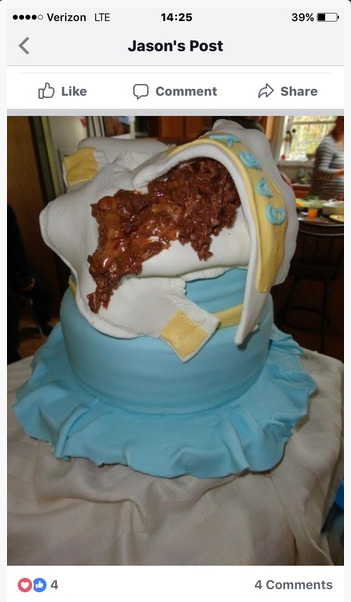 Other people commented on how disgusting it is:

"Is it a shitty nappy on a cake? How appetising!"

"Oh god! Is it meant to be a shitty nappy? Surely not."

"That cake is repugnant."

"Christ on a crumpet! That's an abomination."

"Wow! I honestly have no words. Wtf. Whatever happened to just normal cakes?"


popular
Tom Cruise slated for "inappropriate" behaviour around Kate Middleton
Warning issued to dog owners about the "big stretch"
2 children hospitalised amid US baby formula shortage
Ryanair passenger refuses to swap seats with mum and baby- was she wrong?
'Exclusionary' and 'elitist' – time to end allocations of school places for family connections
Teenager dies after hole he digged on the beach collapses
Mum reveals why you should never let your child sit on your lap on a slide
You may also like
1 day ago
New mum criticised for admitting she won't bathe her baby until he is a month old
1 week ago
Parenting confession: "My in-laws are gatecrashing our family holiday"
2 weeks ago
'Coastal grandmother' is the viral 2022 fashion vibe you did not see coming
2 weeks ago
A TikTok-er showed the size of an epidural needle, and yep, it's huge
3 weeks ago
Women are sharing pictures of their 'saggy' boobs on social media – and here's why
3 weeks ago
The internet calls this dad's reaction to viral TikTok gender reveal a 'big red flag
Next Page