Note of warning... never heat your eggs up THIS way in the microwave

Whether it's your go-to lunch, or midday grub, there's nothing better than getting up from your desk and giving a hard boiled egg a whack in the microwave.

But please, the next time you're tempted to, don't... because, it may well explode on you.

Anthony Nash and Lauren von Blohn in San Francisco were asked to look into this phenomenon after a man filed a lawsuit against a restaurant.

The man claimed that when his plate was brought down to him, the egg exploded and he received burn injuries to the face.

Anthony and Lauren decided to at first look at YouTube videos of exploding eggs, but found there were too many variables, so they decided to conduct their own experiments.

While they were in the middle of their research, the case was settled in court, but they decided to continue with their findings and it has recently been published by Eureka Alert.

In their research, all of their eggs were placed in a bowl of water and heated for three minutes in a microwave.

They found that 30 percent of the eggs tested survived and only exploded after being taken away from the microwave and poked with a knife or sharp object. 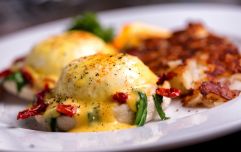 END_OF_DOCUMENT_TOKEN_TO_BE_REPLACED

Anthony said: "For both the exploded eggs and eggs that didn't explode, we would probe the inside of the yolk with the thermometer.

"We discovered that the yolk's temperature was consistently higher than the surrounding water bath."

Er... we're not going to chance it next time.


popular
Barry Keoghan announces the name of his baby boy
Ashling Murphy had so much more to give, says heartbroken parents
4-year-old girl killed in Sligo caravan park named locally
This mum's post about dying to send her kids back to school is too funny
Musings: I think 'Lawnmower' parenting is damaging for children
Planning your next getaway? Here are 6 fun family activities to try this summer
Lauren Goodger assaulted and taken to hospital after daughter's funeral
You may also like
3 years ago
This 5-minute breakfast mug is perfect breakfast for time-starved mums
3 years ago
There may be no need to avoid nuts or dairy during pregnancy, says new study
3 years ago
These quick and easy egg muffins will become your weekday breakfast saviour
3 years ago
Breakfast hack: Here's how to scramble an egg INSIDE its shell
4 years ago
Runny eggs are OK for pregnant women, says UK food watchdog
4 years ago
This 5-minute breakfast mug is the ultimate morning treat on the go
Next Page