Point-of-sale recall notices are to be displayed in stores supplied with the implicated batches.

The Food Safety Authority of Ireland (FSAI) has issued a recall of a popular ice-cream sold in stores nationwide due to the presence of an unauthorised pesticide.

A batch of Milka Vanilla and Chocolate Swirl ice-cream sticks was found to contain the presence of ethylene oxide, a chemical often used as a sterilising agent.

The source of the chemical in the batch was identified as locust bean gum, an EU-approved food additive used as a thickening or gelling agent in the production of various food products, including the Milka ice-creams.

While ethylene oxide is largely used to sterilise medical materials and instruments, it is not permitted for use in foods sold in the EU due to the risks from its toxicity.

It is approved for use in food by some countries outside of the EU, which may lead to food being treated with it before it is exported to countries within the EU. 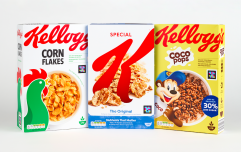 END_OF_DOCUMENT_TOKEN_TO_BE_REPLACED

The food authority added that point-of-sale recall notices will be displayed in stores supplied with the implicated batches, which have a best before date of April 2023 and a batch code of MI1096.

The recall of the ice-cream comes alongside another recall of products found to contain traces of ethylene oxide.

The FSAI was notified of Pukka Herbs UK's recall of several Organic Food Supplements, including ones for menopause and menstruation, due to the presence of the chemical.

popular
"My heart sank": Tubridy hit with backlash over Toy Show remark
Downton Abbey's Jessica Brown Findlay welcomes twins after IVF struggle
Irish company create app that will send your kids messages from an Elf
Mysterious clumps in Christmas tree should be removed immediately
Elf on the Shelf is actually pretty bad for your kids, according to an expert
Expert says Cocomelon acts "as a drug" to kids' brains
5 reasons having a son is the best (even if you were hoping for a girl)
You may also like
13 hours ago
Radio station to remove homophobic slur from Fairytale of New York
1 day ago
Mysterious clumps in Christmas tree should be removed immediately
1 week ago
Man who exposed Jimmy Saville has a new theory about Madeleine McCann's disappearance
2 weeks ago
Spencer Matthews to climb Everest in bid to find brother's body
2 weeks ago
David Walliams could be removed from Britain's Got Talent following 'offensive' remarks
3 weeks ago
Government's five-day domestic violence leave plan criticised
Next Page