Sneak healthy into your picky eater with these delicious veggie muffins

Are you always trying to disguise healthy food for your little suspicious eaters?

Are your green beans actually light sabers for fairies? (This worked for me yesterday I swear!)

Well, now you will rejoice with happiness as we have found the perfect bun substitute for your little fusspot. Sweet Potato, Apple and Cinnamon Muffins anyone?

I often hear parents saying that their child was a 'brilliant eater' until they reached the age of two or three. Imagine the shock to the system when previously easy-going meals turn into battle grounds in an extreme form of pickiness we all know and hate.

The good news is that most kids outgrow the picky eating stage of the age of five or six. The other amazing news is that we have discovered this fabulous recipe from Fiona's fine foods, that jazzes up the traditional muffin while also getting vitamins and minerals into your children with no nasties!

Preheat the oven to 175 degrees celsius. Mix everything together in a bowl. Grease the tins with coconut oil or use silicon liners. Divide the mixture between the tins. Bake for 30-36 mins until the muffins are cooked through and the tops are golden. Remove from the oven and let stand for 10 minutes. Enjoy! 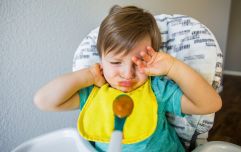 END_OF_DOCUMENT_TOKEN_TO_BE_REPLACED

You can use other dried fruit instead of the figs or substitute the nuts for if you like.

These are great for breakfast, snacks on the go or in their lunchboxes. Perfect for you too with a cup of tea!

As there is no fat in them to preserve them, so they need to be stored in a sealed container in the fridge for 3-5 days. They also freeze really well.

I have personally tried them and plan on making a batch this weekend as they are totally delicious!

For more information on these recipes and on Fiona's healthy cookery demonstrations check this out.


popular
The 30 baby names that are going to be super popular in 10 years time
10 beautiful baby girl names none of your friends will have thought of first
Flower power: 11 cute baby names perfect for your summer baby
Christmas FM returns tomorrow, July 9 - for one day only
Mothers outside the Dáil once again to demand maternity leave extension
10 baby boy names forgotten in time – that we reckon deserve a second chance
14 super sweet and short Icelandic names perfect for baby girls
You may also like
1 month ago
Teething terrors? These healthy baby popsicles are perfect for teething tots
8 months ago
Aldi's Baby Toy Week is coming and these are our five favourites from the range
9 months ago
These psychotherapists have come up with a brilliant way to deal with temper tantrums
11 months ago
Mum writes viral post detailing how her toddler almost died and it's eye-opening
1 year ago
Well it's official, children misbehave the most around this parent
1 year ago
Mums share the crazy things their toddlers do (in other people's homes)
Next Page