Most years when people say it feels like Easter was only yesterday it's just a saying but this year it feels a bit like deja vu given that we're in lockdown again.

While this year has not started out in the most positive way there is light at the end of the tunnel, and it's chocolate.

One of our favourite brands, Terry's Chocolate Orange has just launched white chocolate mini eggs in the run up to Easter and we're going to need a whole shelf of them!

The release of the new white chocolate mini eggs comes one year after Terry's launched their first range of mini eggs. 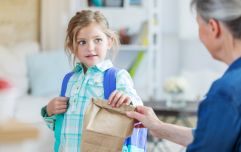 END_OF_DOCUMENT_TOKEN_TO_BE_REPLACED

While Terry's themselves has not posted on their official social media (they last posted just before Christmas) about the white chocolate mini eggs yet, they were spotted in Tesco recently so were expecting they'll make an announcement any day now.

As for me, I love anything Terry's Chocolate Orange and I am definitely going to be keeping an eye out in my local Tesco the next time that I'm in.

Have you spotted the new white mini eggs? Let's us know in the comments if you have!

popular
Louise Thompson returns to hospital amid health struggle
First Dates' Merlin Griffiths says recovery from bowel cancer "won't be fast"
Dad asks public to forgive his wife after she killed their three children
Molly Mae says becoming a mum is the best thing that ever happened to her
Fans call out Jake Paul for insensitive comment on Molly-Mae's baby announcement
Molly-Mae Hague's sister Zoe has just shared the cutest unseen pictures of baby Bambi
Police special operations unit seize mother's e-scooter after she took child to school on it
You may also like
2 weeks ago
Mum refuses to tell partner gender of their baby after he skipped scan to go to the chippy
2 months ago
Cadbury makes controversial change to beloved Heroes tub
3 months ago
Trick or treat yourself with this Cobweb Cheesecake Recipe
4 months ago
Bon appétit! 13 food and drink inspired baby names for both boys and girls
4 months ago
Krispy Kreme and Jaffa Cakes come together to create limited edition Jaffanut
5 months ago
Health: Nutrition Experts reveal the key nutrients needed for learning
Next Page