Turns out, you might have been using tin foil wrong this whole time

We are a sucker for a good life hack here at Herfamily.ie, and this week, our minds were blown to find out we may just have been using tin foil wrong this whole flipping time.

On an episode of his BBC Two show Fresh Start, TV chef Tom Kerridge was cooking fish when he dropped this little nugget of information many of us had never once heard of before: There is a reason tin foil comes with one shiny side, and one mat, and actually, it matters greatly which side you have facing up or down when you're cooking.

On the programme, where Kerridge helps families change their lifestyles by cooking healthier meals, he explained:

‘There are two sides to tin foil, there's the shiny side and the not so shiny side.

‘Always remember dull side up, shiny side down, it's the reflective side – that's going to reflect as much heat back as possible.

Are you as shook as we were? You are not alone.

Many viewers across the UK took to social media to share just how eye-opening Kerridge's revelation had been: 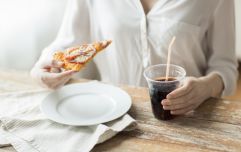 END_OF_DOCUMENT_TOKEN_TO_BE_REPLACED

'Well! You learn something new EVERY day. Today’s is that shiny side on tin foil goes towards food and dull side goes up. Thanks @ChefTomKerridge Not sure how I’ve got to 52 without knowing #FreshStart.’

‘@ChefTomKerridge tinfoil shiny side down been doing it wrong my whole life #tinfoil.’

Others, however, weren't all that shocked, claiming they always thought this was common knowledge.

‘Thought it was obvious that it was shining side down....’

‘The foil i buy every week has this printed on the box so its not new news im afraid :).’

After the conversation had exploded on Twitter, Kerridge was invited onto This Morning, to further explain his statements on the proper use of tin foil.

Phillip Schofield,  one of the hosts of the show, admitted he had never given the sides much thought before now, but reckoned he had been doing it wrong.

'I’ve always used it shiny side up, have I been doing it wrong all these years?’

To this, Kerridge, who is a Michelin Star winner,  explained:

‘Well it does, it makes perfect sense to me and it’s the way I’ve always been taught that shiny side goes down – that reflects – it’s reflective, it’s the most reflective surely so it works more economically, reflecting heat, cooking in a more even way.’


popular
Stacey Solomon slams 'one night of freedom' stag-do ahead of wedding
Meghan Markle visits Texas school shooting memorial
Claire Byrne reveals her RTÉ show is ending after 7 years
Woman hit by a motorbike in Dublin city fighting for her life in hospital
Deborah James praises doctors who gave her more time with her children
Dealing with sick tummies, sore heads or high fevers? We've got the perfect solution...
9 of the best outdoor family experiences in Ireland's Ancient East
You may also like
2 weeks ago
Takeaways prices likely to increase this year, experts warn
3 weeks ago
New mum says her child won't eat from a kids menu and parents have a LOT to say
1 month ago
Mum issues warning after sour sweet burns layers off her son's tongue
1 month ago
Krispy Kreme to open huge new store in Dublin city centre this May
1 month ago
3 egg-stremely tasty treats to make with the kids this long weekend
1 month ago
Everyone on TikTok is obsessing over this coffee orange juice recipe
Next Page