When travelling with kids, finding seats together can feel like Mission Impossible.

For one mum, it led to a whole ordeal with a stranger that left herself and her kids shaken up – but even her own family is divided on who was in the wrong.

In a post on Reddit's Am I The A**hole forum, the woman shared how she was travelling with her two kids, aged seven and four, over New Years to visit a relative battling cancer.

The journey was to be for several hours. When three boarded the train, the mum said they were feeling "tired" and "overwhelmed" so sat down in reserved seats, though the train was fairly empty at this point.

For a while they remained seated with no issues, but after a time, people came looking for the seats they had booked.

"When people came on looking for their seats I stayed quiet and hoped their seats weren't ours," she admitted. "A man walked up and down the train a few times before starting to ask people if they could move (so he could see the numbers on the headrests), which I thought was pretty rude when he could easily have just sat in another seat for now (the train wasn't that full).

"Anyway, it turned out that my daughter was sitting in the seat this guy had reserved and when he aggressively said to her that she was in his seat she kind of looked a bit startled and looked to me.

"I had been watching this guy be rude to other passengers and I was pretty angry that he'd speak to my daughter the same way, rather than look to me and ask politely. She's seven and is obviously with me."

The mum added that she told her daughter to stay put. She then addressed the man, saying there were no other seats where the family of three could sit together – but there were spare seats he could sit in as he was a solo traveller. 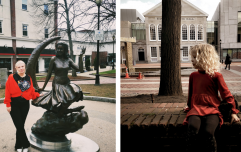 This Family Travels: our amazing trip to the witchy and wonderful Salem

END_OF_DOCUMENT_TOKEN_TO_BE_REPLACED

"He goes off muttering and I assumed he was going to sit down but he came back a few minutes later with a member of staff and was shouting at this point how we had stolen his seats that he'd paid money for and we weren't even supposed to be on the train," she continued.

"The woman checked our tickets and I explained to her that we were just tired and didn't think it would have been a problem to sit in the seats whilst the train wasn't full. To his fury the woman told us not to worry and also suggested that he sit elsewhere."

The mum claimed the man then started shouting about how the three had stolen his seat and that "children weren't above the law".

"Long story short he was told that he needed to get off the train at the next stop as he wasn't welcome on the service. At this point, both of my kids were pretty shaken and I regretted the whole journey but wasn't sure what I could even do at this point."

She then asked the forum if she was at fault for creating the situation as part of her believes the man was just "going to cause an argument with somebody" even if it wasn't them, but she's still unsure and has been mulling it over. Her family are also "split" on the whole incident regarding what she should or shouldn't have done.

The post garnered thousands of responses, many stating the woman was in the wrong.

One person wrote: "He paid for that seat, and your level of entitlement is staggering. I’m honestly shocked that the staff member sided so blatantly with you. If the train 'Wasn’t that full' why would you sit in the reserved spots?"

Another replied: "I honestly think the staff sided with her because this man had gotten loud. If he hadn't, I think OP would have been made to move."

A third added: "You were in stolen seats, saw the guy trying to find his seats, said nothing, even though you suspected you were in his seats, then refused to move when he figured it out. You were absolutely the problem. I have three young children and might have sat there when it was empty, but seeing him searching for his seat, I would have spoken up right then and asked if we were in one of his seats."

Someone else chimed in: "All you cared about was what YOU wanted. Angry old man aside I feel bad for the attendant. I bet dealing with both of you caused her to open a bottle of wine when she got home from work."


popular
Meghan Markle visits Texas school shooting memorial
The reason why mums wake up when babies cry and dads stay asleep is interesting
Doctor warns women not to follow Kourtney Kardashian's fertility advice
"Back where she belongs": Saoirse Ruane leaves hospital after 9 days
9 of the best outdoor family experiences in Ireland's Ancient East
Bridgerton star reveals she has been hospitalised with mental health issues
Husband of Texas shooting victim Irma Garcia dies of fatal heart attack
You may also like
4 days ago
Dublin Airport passengers left furious over extreme queues
1 week ago
Things to do in Donegal: Everything that will make this the perfect family holiday
1 week ago
Ryanair passenger refuses to swap seats with mum and baby- was she wrong?
1 week ago
The nine things you really need to know before travelling with a toddler
1 week ago
Holidaying abroad: Here is what you need to know about flying in your 3rd trimester
2 weeks ago
This mum is leaving her new baby for a month and people aren't impressed
Next Page