It has been a year and a half years since Clea Shearer and Joanna Teplin of The Home Edit inspired us to colour coordinate our homes in Netflix' first ever season of their show, Get Organised With The Home Edit.

From books to snacks, our wardrobes and art supplies, we all dived in and decluttered and organised with the Rainbow Method to within an inch of our lives – and sanity.

However, now that some time has passed, I think I speak for many of us when I say there is absolutely time for some organising again. And as luck would have it, now the professional organisers are returning for more decluttering fun, with Netflix just dropping a full-length trailer for season two of Get Organised with the Home Edit.

And similar to the first instalment, the new episodes will also feature Clea and Joanna tackling various projects in a variety of people's homes.

The trailer re-introduces viewers to Clea and Joanna: 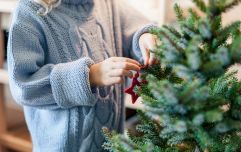 END_OF_DOCUMENT_TOKEN_TO_BE_REPLACED

“We are professional organizers,” Clea says. “Post-Get Organized on Netflix, everything changed overnight. We have clients all over the country, including some celebrities.”

In each episode, the organisers (and their team) must complete projects for their clients, who, in this season, range from the likes of Drew Barrymore to Danielle Brooks and Lauren Conrad.  Not only do the organisers share tips as they work, but they also do so with plenty of humour and quick remarks. Hey – it's a system!

After hours of hard work, the results are extremely satisfying. “How do you do what you do?” Barrymore yells in one scene.

In another clip from the new season, which is due to land on Netflix on April 1st, Kelsea Ballerini opens her newly organised kitchen drawer and says, “Here it is. This calms my anxiety in a way that I can’t quite explain.”

popular
Lauren Graham shares who she thinks Rory's baby daddy is
Brian Dowling: "Aoife never thought the baby was hers"
7 Christmas markets and Santa experiences to visit with kids this winter
Warning issued to Irish parents after increase in RSV cases
He's back! 10 easy peasy Elf return ideas to kick off December with
Stuck For a Baby Name? Let These Online Generators Do The Work For You!
The ultimate list of Santa Experiences to get booking now
You may also like
1 week ago
Here's how much this year's I'm A Celeb stars have been paid
1 week ago
Legendary Aussie soap Neighbours is returning
1 week ago
Nick Cannon estimates how much he pays in child support
2 weeks ago
David Walliams could be removed from Britain's Got Talent following 'offensive' remarks
1 month ago
Netflix is set to crack down on password sharing very soon
1 month ago
Here's everything we know about the Strictly mole drama
Next Page