"Nothing in my gut gives me that impression."

Jackie Belanoff Smith has said that she doesn't believe her new husband Ben Foden will cheat on her.

She and Ben said "I do" at the weekend, having gone public with their romance a day beforehand.

They had been an item for just two weeks before deciding to tie the knot.

Ben shared the news on his Instagram and while many fans shared their congratulations, some voiced concerns that he would be unfaithful to her.

The rugby player previously admitted to cheating on his ex-wife Una Healy while she was pregnant with their son Tadgh.

But Jackie has said she's not worried and even joked with social media followers that she'd unleash them on him if he were to misbehave.

"I really don’t think he will!!! Like nothing in my gut gives me that impression," she wrote.

"But if he does, I know exactly who I’ll unleash on him hahaha." 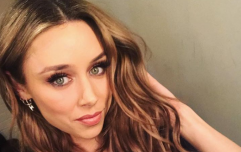 END_OF_DOCUMENT_TOKEN_TO_BE_REPLACED

She also responded to a commenter who said they were taking bets on how long their marriage would last.

Ben and Jackie, an American who owns her own lifestyle products business, wed on a boat in Nantucket, Massachusetts with her sister Leila as witness.

Announcing their marriage, Ben admitted that people might find the decision rushed but said he'd been swept off his feet.

"People will say we are mad or crazy or even fools, as @snackyjax and I had only been dating seriously for a little over 2 weeks before deciding to get married," he wrote.

"But when someone like her comes in to your life, why would I wait?"


popular
Viewers raise over €290,000 after Munster's Billy Holland and wife Lanlih's emotional Late Late Show appearance
Expecting a baby boy? 10 short and sweet names that are actually really cool
The ironing hack that's about to make your everyday life so much easier
Brad Pitt's response to the drama over his reunion with Jennifer Aniston is interesting, to say the least
Mother says she used tech gadget Alexa to potty train her son and it worked wonders
Royal insider responds to reports Meghan Markle is set for a tell-all interview with Ellen DeGeneres
The most popular baby names in the world have been revealed
You may also like
2 months ago
Una Healy's daughter looks the IMAGE of her mum in latest photo
3 months ago
Una Healy hints that marriage may be on the cards with David Breen
4 months ago
Una Healy and Ben Foden share photos from their son's first day of school
5 months ago
Una Healy 'shocked' by ex-husband Ben Foden's decision to marry girlfriend of two weeks
5 months ago
'A pretty special day' Ben Foden has just gone Instagram official with his new girlfriend
7 months ago
Una Healy shares snap of her new home almost a year after splitting from Ben Foden
Next Page