Vogue Williams CONFIRMS she and Spencer Matthews have tied the knot

OMG, this is so cute.

After weeks of rumours, Vogue Williams has now confirmed that Spencer Matthews is indeed her husband.

However, she didn't do it in the usual fashion of uploading a wedding dress, the rings, or even a photo of the pair on their wedding day.

Instead, she shared a black and white photo of Spencer on social media and simply said, "That's my husband," with a heart-eye emoji.

It was reported last week that Vogue and Spencer tied the knot in an intimate ceremony in Scotland.

The parents-to-be, who announced their engagement in February this year, are said to have exchange vows at his family's 10,000-acre Glen Affric estate in Cannich, Scotland. 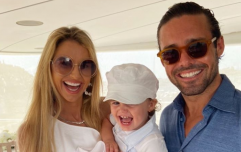 Vogue Williams praises her brave son Theodore after an 'accident' in St. Barts

END_OF_DOCUMENT_TOKEN_TO_BE_REPLACED

The publication reports that Vogue, who was previously married to Brian McFadden, wore an off-white V-neck gown by Paul Costelloe.

Spencer popped the question back in February, after the pair had gone on a backstage tour after a performance of The Lion King.

We're still holding out for pictures of the big day, so watch this space.