She wasn't holding back.

Musician Alicia Keys has recently spoken out about gender stereotyping after seeing the effects it has had on her own child.

The mother of two said that she noticed how negatively gender roles impacted her own children when her son was ashamed to be seen with painted nails. 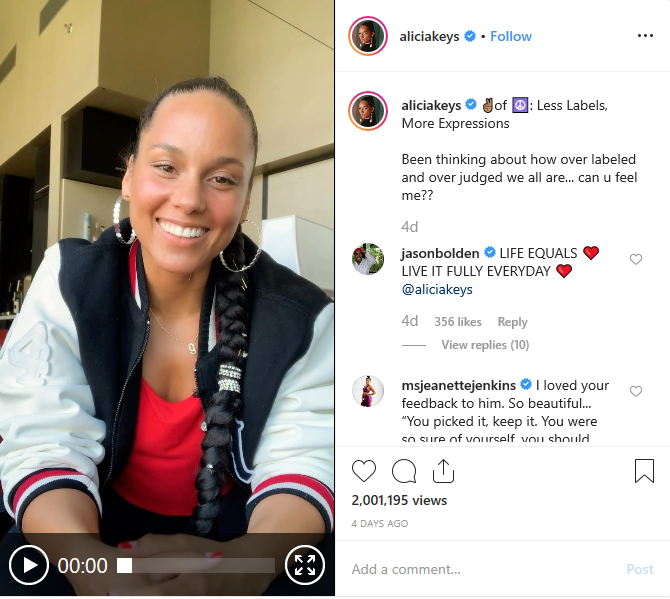 The Girl On Fire singer posted the video to her Instagram along with the caption;

"Been thinking about how over labeled and over judged we all are... can u feel me??"

Keys went on to describe a situation where her son Genesis was afraid that people would judge him for his rainbow coloured nails.

"He tells the lady that he wants rainbow colours on his nails. And she brings all of these colours and she paints each nail a different colour.

After she painted his nails, he looked at me and he said: ‘Mommy, I don’t want this on my nails.’ He was like: ‘People are not going to like it.

Can you believe this? He’s four and he already understands the concept that someone is going to judge him because he chose rainbow colour on his nail."

Keys went on to speak about how it's not just children who fall victim to feeling judged based on how masculine or feminine they act but all of us.

"There are masculine and feminine energies inside of us all, period, that’s just how it is."

Back in 2016 Keys made headlines by announcing that she was done with wearing makeup, something often expected of women working in the music industry.

With more clothing lines and toy companies creating more gender-neutral products, isn't it time that we hang up the ideas of gender norms for good?

That way, children can grow up and not feel pressured to conform to a certain stereotype because it's important to remember that every child (just like every adult) is unique.

popular
Emma Pattison made distressed call to sister before murder-suicide
Vogue Williams opens up about her divorce from Brian McFadden
Dunnes Stores launches stunning collection of Communion dresses
Siblings kidnapped in March 2022 have been found alive
Brendan Fraser blamed himself after son's autism diagnosis
Expert team end search for Nicola Bulley declaring she’s not in the water
Emma Pattison: Tributes paid following death of head teacher and her family
You may also like
4 months ago
Bon appétit! 13 food and drink inspired baby names for both boys and girls
1 year ago
And ACTION! 20 fantastic baby names that are also the names of film titles
1 year ago
First ever gender neutral passports are issued in the US
1 year ago
Selling Sunet's Christine Quinn will raise her child gender neutral and as a 'fashionista'
2 years ago
California is making its toy stores gender neutral and I think it's time Ireland did
3 years ago
All schools in Wales to make uniforms gender neutral by the start of September
Next Page