Back in April of this year the World Health Organisation issued new screen time recommendations for parents, reaffirming that prolonged screen time has a negative impact on kids, and declaring that children under one should not have any screen time at all.

There is no denying that the majority of us, children included, spend more and more of our time glued to devices. And although you might be telling yourself you have got your children's use of screens under control, that they need some time to just "chill out" with their devices, chances are they are still spending too much time in front of a screen, and you really need to be making some changes.

This was certainly the case for Molly DeFrank, parenting blogger and mum of five, who recently decided to go completely screenless (aka a "screen detox") for a while, to see how this would change her kids behaviour and the dymanic in the family.

Speaking to CafeMom, DeFrank explains they had a strict 'one hour a day' policy in place, but she had started feeling like even this was too much, and the turning point came when she noticed her kids were "grumpy and argumentative" whenever it came time to turn off the screens.

"One day, I came home from running errands and my son greeted me at the door with, 'Can I play on your phone?'" she says. "That was the last straw for me."

And so this clever mum did what mums do best – she came up with a plan.

"I talked with my husband and we agreed it was time for a change," she explains. "That night at dinner, we told the kids we were taking a screen break. They protested, of course. But after a few tears, everyone moved on."

The next day, surprisingly, the children didn't even bother begging for their screens.

"The knew it was a non-starter," DeFrank says, "and what happened over the next few weeks blew our minds. It was like we flipped a switch: We had our kids back. They were more obedient, less grumpy, played better together, more creative and happier."

And so although DeFrank explained she had braced herself for a rougher transition and fully expected to get some pushback, she was pleasantly surprised when there wasn't any.

The first day of the detox, DeFrank explains, she decided to take a closer look at her kids' individual interests and talents, and "tried to feed those things."

She pulled out art supplies and books, looked into piano lessons, and got some more math puzzles.

And what happened, rather than moaning about missing their screens, the children found that actually, they had plenty of things to keep them occupied. 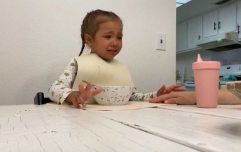 END_OF_DOCUMENT_TOKEN_TO_BE_REPLACED

"YOU GUYS. We are on week SIX of no screens for the children. Everyone is still alive. No one has died of YouTube withdrawals or Netflix deficiency. In fact, these little people have read more books, collected more sticks, played more board games, done voluntary math, built more forts and used their precious imaginations to slay dragons and rescue Lego people. I did catch the three-year-old girls reenacting scenes from Frozen. It was adorable...Even if it was a subtle cry for the days of yore.

Anyway. I definitely don't think all screens are terrible. I just want them to work for us, rather than the other way around. I wanted to share our experience so far. In case you're considering a screen sabbatical for your tiny peeps, I highly recommend it! DO IT!"

Originally, DeFrank explains, the ban was only supposed to be for a few weeks, but after seeing how well it was going, the mum-of-five decided to extend it for a few months. And now, instead of going completely back to how things were, the children are allowed one hour of screen time per week, and that, she explains, been working just fine for everyone.

"Of course, technology can be helpful and wonderful -- in its right place," she tells CafeMom. "We have since tried to put technology in its proper place in our home."

These days, the children are allowed to play a preapproved video game or watch a show for one hour on Sundays.

"That's it," she says. "The bottom line for us is allowing technology to work for us, rather than being enslaved to technology."

She also explains that these are the rules for their house, and that when her children go to play in their friends' houses, their parents make the rules on screen time.

"Usually if they are hanging out with friends or cousins, they would rather play than watch TV," she explains. "So it works out."

"We did not stage this photo," she joked in the caption, before noting how books have become huge in her home these last few months.

"A few Saturdays into our screen detox, my kids woke up one by one and saw my husband and I reading in bed," she continued. "They grabbed their own books and joined us. At restaurants, they bring a stack of books instead of propped iPads."

All this reading has had some real tangible results too. "My daughter has grown five reading levels in seven months," the mom proudly shared.

As for advice for parents who are interested in trying a screen detox themselves, DeFrank says:

"I would say step one is to quit screens cold turkey for a specified amount of time," she says. "Then, watch the results and make a plan that works best for your family."

In the end, she says, she hopes that her own progress will encourage and inspire parents to take the plunge with their own families.

"If you feel like technology and screens have too big a place in your home," she notes, "you can change that, and it’s not as hard as you’d think."


popular
Hospital bag essential - mum shares 'Pad-sicles' hack all expectant mums need
Are you the middle child? It could mean that you're the best friend to have
"She's already changed our world" Gigi Hadid and Zayn Malik welcome baby girl
Win a complete Eucerin anti-pigmentation bundle for you and your mum
These 5 Foods Could Increase Your Chances of Having Twins
WATCH: Netflix is bringing out a documentary on the Watts family murder
"I never really appreciated how hair makes me feel" Roz Purcell shares her struggle with hair loss
You may also like
3 days ago
Dear mums – here are the words we really need to share with every new mother we know
5 days ago
Whoops! Chrissy Teigen just accidentally revealed her baby's sex in the cutest slip of tongue
1 week ago
Husband records video of wife reacting to a child free day out and it's so relatable
1 week ago
Jennifer Garner responds to pregnancy rumours in the best way possible
2 weeks ago
Fearne Cotton just turned 39 – and shared the most amazingly honest post about the beauty of getting older
2 weeks ago
You are going to wish you had known about this dad's crazy effective sleep hack sooner
Next Page