So handy to know.

People think I'm joking when I say that being able to go shopping without the kids is like having a mini vacation but trust me I'm not joking.

Almost every time we go to a shop my children ask me for something that they've spotted. Sometimes it's as easy as saying 'no you can't have that', sometimes there's a temper tantrum.

If this all sounds familiar there may be light at the end of the tunnel as this mum has a nifty hack that we'll definitely be stealing.

So what is this mum's genius hack? 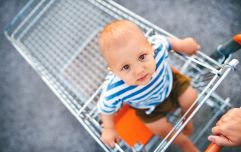 END_OF_DOCUMENT_TOKEN_TO_BE_REPLACED

Mum Kristina Watts shared this post to Facebook and given that it has been shared over 47,000 times I would say it has become quite popular with other parents.

Watts shared some photos of her daughter alongside the many items she asked for on their shopping trip;

"Once again my camera roll is FULL of pictures of Emerson with every single thing she wants for Christmas. Why...because it’s the most amazing parenting hack ever and has stopped MANY meltdowns! If you aren’t using this hack...listen up friends.

Take a picture. It’s that simple.

Pause for a second, comment on the thing they’re pointing out, and say, “Let’s take a picture with it and send it to Santa so he knows you want it!” Note: you can send it to Santa, grandma, TeeTee Stephanie or whoever it is you can pawn it off on. Totally up to you and can be different every time.

Magically, Emmie smiles, says cheese, asks to see the picture, then PUTS THE TOY DOWN AND WALKS AWAY. It’s magical. No tears. No tantrums (by either of us). And she forgets about all of them within minutes."

So simple but such a good idea. My phone is already on the brink of exploding from photos but if this hack truly works I will move them all onto an SD card because a simple shopping trip is worth it.


popular
Foster mum who killed baby boy jailed for 18 years
Kate Moss responds to claims Johnny Depp pushed her down stairs
Death toll in Texas primary school shooting rises: 19 children and 2 teachers shot dead
Saoirse Ruane's mum reveals she is out of ICU after cancer surgery
9 of the best outdoor family experiences in Ireland's Ancient East
"He will always be a danger": James Bulger's dad says son's killer should never be released
Irish mum claims her children were almost abducted on holiday in Turkey
You may also like
1 week ago
Here’s how to plan a family holiday without spending a fortune
1 month ago
M&S replaces 'nude' shade from all product ranges to make them more inclusive
1 month ago
How to dress like a French girl – the only 12 items you need in your wardrobe
2 months ago
SHEIN opens a pop-up showroom in Dublin – but hurry, it's just until Sunday
3 months ago
Mr Price launches cheap Communion dress range from €17.99 - €29.99
3 months ago
A denim dress is about to become your wardrobe staple for spring 2022
Next Page