New study: Exposing kids to two languages (or more) from birth will 'super-charge' their brains

If you are debating whether or not you should expose your baby to two languages, we bet this will prompt you to dust off those old Irish/French/Spanish skills (no matter how basic) straight away.

Because a new study has shown that babies raised in bilingual environments develop core cognitive skills like decision-making and problem-solving -- long before they can even speak.

Researchers then monitored the babies’ responses to the sounds using magnetoencephalography (MEG), which helped them clearly identify which parts of the brain were activated via electromagnetic activity.

And what transpired, was that the babies from English- and Spanish-speaking households had more activity in the prefrontal cortex and orbitofrontal cortex -- the regions of the brain responsible for executive functions, like decision-making and problem-solving.

“Our results suggest that before they even start talking, babies raised in bilingual households are getting practise at tasks related to executive function,” lead study author Naja Ferjan Ramírez said in a press release.

His co-author, Patricia Kuhl, backed this up.

"Babies raised listening to two languages seem to stay 'open' to the sounds of novel languages longer than their monolingual peers, which is a good and highly adaptive thing for their brains to do." 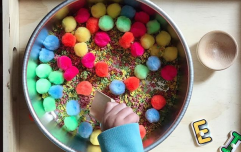 END_OF_DOCUMENT_TOKEN_TO_BE_REPLACED

This research seems to back up older studies, which also show that the adaptive mechanism of handling two languages reaps enormous benefits for both babies and adults. In fact, this study from National Center for Biotechnology Information, showed that bilingual adults have better executive brain functions than adults who only speak one language. That means bilingual adults are better able to switch focus between tasks, recall memories, and demonstrate higher-level problem-solving and planning skills.

Oh, and it doesn't end there. Other research has shown that learning another language can even help prevent or delay the onset of degenerative brain diseases like dementia or Alzheimer’s for older adults.

Here are three tips from the Linguistic Society for raising a bilingual child -- even if you’re not bilingual:


popular
Due next month? Here are 3 things to note about May babies
Mum admits she hates playing with her daughter, and we can relate.
Conor McGregor just told his little boy to punch another child in the mouth
The royals have just revealed a never-seen-before family photo – and it's adorable
The ultimate Guacamole for healthy Summer eating from The Happy Pear
Rachel Riley announces pregnancy in true Countdown style
WATCH: Beauty ace Caroline Hirons teaches facial massage for supermodel skin
You may also like
1 month ago
The two most important words you need in your vocabulary when raising toddlers
3 months ago
A paramedic has shared a simple hack to check for toddler choking hazards
3 months ago
Got a picky eater on your hands? You need to try 'tasting trays' right now
3 months ago
Love the convenience of baby food pouches? Here's why experts say you might need to rethink that
3 months ago
My toddler was super-bossy – but here is how I dealt with her (pretty crazy) demands
3 months ago
All is calm, all is bright: 3 easy ways to 'Christmas proof' your baby's sleep routine
Next Page