How did we not know about this before?

There's only a couple of weeks left until Santa arrives at our homes with gifts for all the boys and girls and excitement is at peak levels in my house.

Every year come Christmas eve we stick on Santa Tracker to see where in the sky old Saint Nick is and it's become one of our favourite traditions.

Now there's something else to add to our list of Santa related traditions and I think it will be making it onto most families must watch Christmas lists.

Yes that's right, Santa has his own YouTube channel and we're so excited!

Santa Television is the Official Internet TV of the Santa Claus / Father Christmas of Lapland in Finland.

Children watching can also discover the other magical aspects of Lapland such as the famous Northern lights. 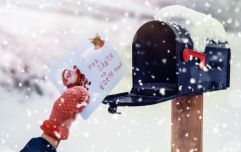 END_OF_DOCUMENT_TOKEN_TO_BE_REPLACED

Videos are available in multiple languages so that children from all across the world can enjoy the festive fun with Santa and all of his helpers.

If you're planning a trip to Lapland this year it's also a great way to get children knowledgeable about the area before they arrive.

Santa Television has hundreds of videos that will keep the kids entertained for hours and is a wonderful way to get everyone into the festive spirit in the run up to Christmas Eve.

I usually stick on Christmas FM while we're putting up the Christmas tree but I think now we'll also have to stick on a video from Santa Television too.


popular
Parent's Benefit Leave extended from today - here's what you need to know
Vicky Phelan shares message of support with Charlie Bird as she deals with pain
"You're disgusting": Prince William roars at photographer who was 'stalking' his family
I tried 'slow parenting' for a year and I'm never going back
6 fun things to do in Dublin on your next family day out
Teenager dies following road traffic collision in Kildare
Expert says Cocomelon acts "as a drug" to kids' brains
You may also like
6 months ago
Mum seeks advice after her son catches her with his gifts from Santa
6 months ago
The Santa Clause trilogy are actually the best Christmas films ever
6 months ago
This Christmas Eve, show non-believers these plausible reasons why Santa is real
6 months ago
Stacey Solomon & Joe Swash surprise Rex with Santa at their very own DIY grotto
6 months ago
These 100-year-old Santa letters are both hilarious and heartwarming
6 months ago
Parenting expert claims making kids sit on Santa's lap is "bullying"
Next Page